A visually beautiful and at times heart breaking account of the life of one of the worlds most powerful artists; Ai Weiwei (Alison Klayman) is showing now on ABC 2-I view. He admits that being powerful also marries equally with fragility as he continually strives to push the harsh boundaries of State Law in China, and putting his life on the line in the process. 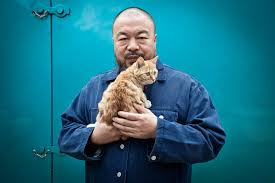 Finding a loophole in China’s Firewall-a twitter account allows him to release a daily account of what is occurring. Largely, this involves the documenting of his surveillance by police alongside his art making; which as the tone of the film implies-is as much art as it is activism. Ai Weiwei feels its his and all artists responsibilities to have freedom of speech through their art making. The film also highlights how a secretive and corruptive political system cannot break all its citizens despite the harshest of penalties.