This week’s diary is a round up of what Melbourne Artist Claire Bridge has been up to lately! I first came across Claire a few years ago during her exhibition Alchemy at Flinders Lane Gallery; discovering her ethereal, floating figures up close for the first time. Having a solid practice as a realist figurative painter, her foray into the inclusion of photography and sound is a welcome addition to further invite audiences to connect. A statement from her website reads:

Bridge is interested not just in creating images but in the process of the transmission of Presence through her works. Her focus is on the feeling the painting evokes in the viewer. 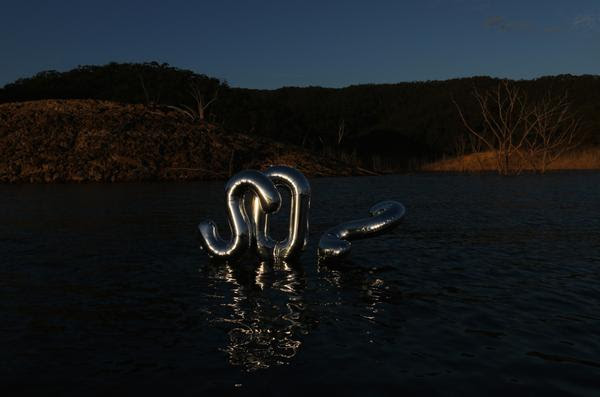 image: Claire Bridge, So it is, 2016, pigment print on archival paper mounted on aluminium composite board, 80 x 118 cm (courtesy of the artist and Flinders Lane Gallery)

And this sneak peek proves she achieves this through the exploration of these other mediums…
By Claire Bridge:
Back in March I had the incredible opportunity to spend an immersive weekend in the Tarkine/takayna as part of the “Tarkine in Motion”, where I stayed in the Tasmanian Rainforest with over 100 artists, musicians, poets and performers gathered along with the Bob Brown Foundation. I was in awe of the incredible intricate diversity of life in the rainforest ecosystems. The beauty, richness and vibrancy of life was astounding!
Now I have the chance to share with you some of the work inspired by that experience.
Thank you to all who donated to the Pozible campaign that made that weekend a reality and an enormous success in bringing the Tarkine front and center in such creative ways.
See more about the exhibition at Flinders Lane Gallery below… 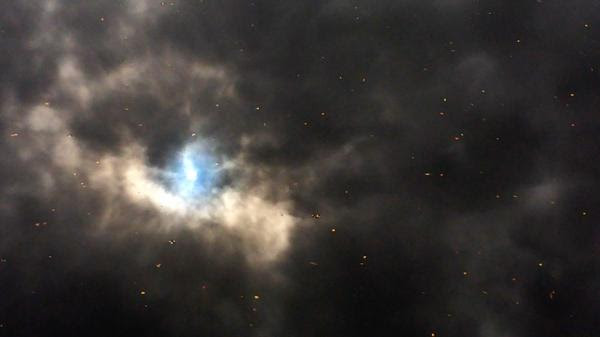 Watch Tempest Flow here on Vimeo
Watch Last Light here
3000 km to meet the devil!
From the most easterly point of Australia at Byron Bay, to the National Parks and lakes of eastern Victoria perched on a boat and over Bass Strait to the takayna/Tarkine in Tasmania, I ventured into beautiful and heartbreaking places. Getting into the takayna/Tarkine was an epic adventure in itself! I flew in at 9 am, was picked up by a wonderful woman only to have her car break down with a cracked radiator due to a flying concrete chip off the road, to be rescued by another artist and driven from a small town just out of Launceston to a drop off point at an intersection of two highways in north Tassie, where I stood at highways edge with luggage – to wait for…. photographer Dan Broun, to collect me from the intersection and drive into Corinna. It was an epic 15 hour trip from Melbourne to get in to the takayna/Tarkine rain-forest! Passing through exquisite country and sadly past the largest iron ore mine in Tasmania. The contrast of living healthy rain-forest against the dead and dying areas surrounding the Savage River mine was devastating. Fortunately I got a rare sighting of a healthy Tassie devil on my first day! (Dan said it was 3 months before he spotted his first devil). Amazing opportunity really, as you may recall it was Dan Broun’s photographs of the Tarkine (I have shared these in previous news updates) that inspired me to go to this extraordinary place… and here I am on a personal guided tour with Dan right to its heart!

I am delighted to announce my work “A drop in the ocean” has been selected for the John Leslie Art Prize. Gippsland Art Gallery received an unprecedented 426 entries from all states in Australia. From the many entries received a selection panel shortlisted 49 finalists to be exhibited in the Gallery, from which the winner will be chosen.
The announcement of the winner of the $20.000 non-acquisitive John Leslie Art Prize will be made at the formal opening on Friday September 2nd at 6.00 pm.

“I continue to explore a core theme of my practice, that of the relationship between ourselves and our planet at the edge of change. In FUSE, I focus on the intricate connection between the causes and impacts of climate change and the global refugee crisis. S.O.S. In each of my works in FUSE, I explore both a harmony and dissonance in the relationship, particularly in the Australian context and within the uniquely Australian landscape.

I have a multidisciplinary approach to my practice and whilst I have predominantly exhibited paintings, over the past two years I have been developing soundscapes (acknowledging the growing significance of the field of sound ecology), photography and now extending my practice beyond the canvas to new media”

This is an exciting opportunity to share with you my new video and sound installations, one of these inspired by the Tarkine, which incorporate my work with what I term “synaesthetic resonance”. Get into the exhibition to experience Tempest Flow and Last Light. 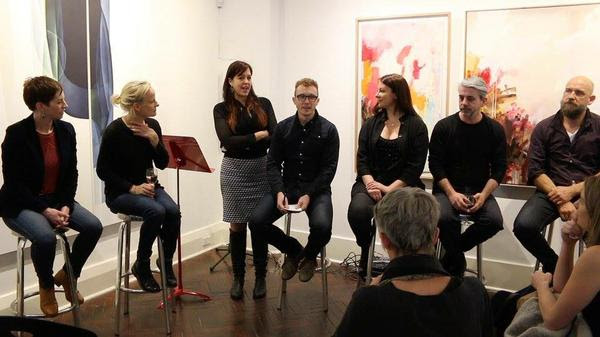 As part of FUSE, Flinders Lane Gallery hosted a panel discussion with Owen Craven artist panel discussion ‘Artist as Entrepeneur’ facilitated by UAP Curator Owen Craven. Artists that particpated were Dion Horstmans, Rebecca Hastings, Agneta Ekholm, Zac Koukoravas & myself, Claire Bridge.
It was a very animated discussion with some great topics such as the importance of STEAM instead of STEM in developing culturally literate Australians, who appreciate and value the arts. 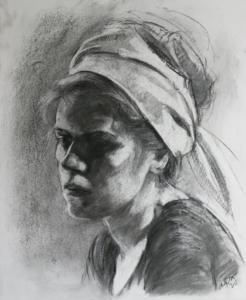