It’s no secret that Melbourne is world reknowned for it’s incredible street art. If you get the chance, and you see this post today

please vote for one of the following murals that will grace the walls of Melbourne’s Artemis Lane. If you see this after 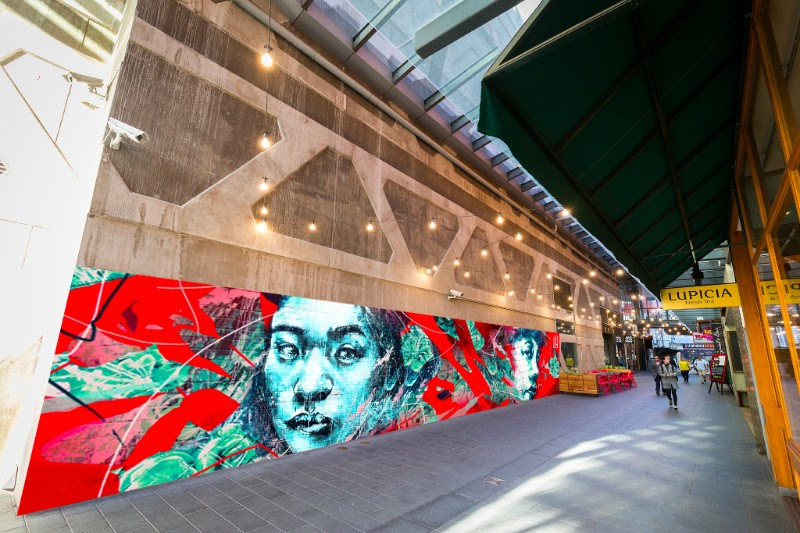 Artist’s Impression: Finalist Mike Eleven’s artwork where it could be painted on Artemis Lane.

QV Melbourne, together with their resident street art curator Andrew Chew of No Vacancy Gallery, have selected four finalists in the #ColourQV street art competition, commissioning each to draft a concept sketch of their proposed artwork for an iconic location in Artemis Lane.

Now comes the best part: Melbourne decides on the winner. Street art lovers can visit QV Melbourne’s Facebook page to view all four sketches and vote for your favourite artwork.

“We have seen a big evolution in street art form and style over the last few years, which was made evident by the entrants this competition received. We couldn’t choose just three, so we now have four diverse artists that each has a unique concept for our wall. Together Mike Eleven, Loretta Lizzio, Pete Cto and Merda represent one of the most eclectic mixes of Melbourne street artists in 2016.”

If you’re a Melburnian, you have probably seen Merda’s work. Highly influential in the formative years of Melbourne’s graffiti scene, Merda (Jay Rankine) was at the forefront of style innovation in Melbourne. Now 25 years on, his pieces continue to be lauded widely. His influences are taken from everyday objects or things around him, always looking for the non-obvious.

Loretta Lizzio is an illustrator of intricate, dream-like works that have been installed at both small and large scale sites. This year, she also released her own fashion line with Element Eden throughout Europe, USA and Australia, while her artwork has also appeared in homes and on furniture.

Mike Eleven’s art has transformed from traditional graffiti letters to subject-based work and experimenting with his own self-taught painting techniques. His works have been exhibited numerous times across Australia, and he was the youngest person ever to compete in Secret Walls, a live competition between two artists akin to a rap battle. Mike was crowned as one of Melbourne’s 40 most iconic artists working on the streets in the Thames & Hudson published book, Melbourne Street Art Guide.

Pete Cto (Pete Seaton) discovered graffiti after completing a fine art degree, and honed his skill at a Street Art Exhibition Centre in Geelong. New to Melbourne’s street art scene, Peter Cto aims to translate feelings of a metaphysical nature through his art. Using portraiture and figurative work as a means of expressing something more than the subject, he aims to create an archetype of self-awareness and empowerment.

The winning artist will complete their artwork from 10 October on the laneway wall between Russell Street and Meat Fish Wine, in QV’s Artemis Lane.

Awarded a grand prize of $5,000, the winner will also be provided with all paint supplies and art materials to complete the artwork, spanning 15 metres in length x 2.4 metres in height. With over 40,000 people a day moving through QV, the winning artist will receive a lot of exposure.

QV’s Regional Centre Manager, Lisa Fleming, says any of the works would suit the laneway wall.

“We are really looking forward to working with one of these local artists to create an iconic piece of wall art for Melbourne to enjoy. The entries have been brilliant, which was no surprise given Melbourne’s track record for producing interesting and thought-provoking laneway art. Our retailers are unique and eclectic and any of these four distinctive pieces of art will provide an engaging visual for our diverse customer base. We can’t wait to see which one Melbourne chooses – remember to cast your vote!”

Visit QV Melbourne’s Facebook page to view all four sketches and vote for your favourite artwork.

#ColourQV Artist Statements
Mike Eleven
Considering the pedestrian-heavy nature of the wall’s location, I wanted to weave a loose way-finding concept into the mural. The two faces I plan to paint will act as directional guides and portray the contrast/duality of Melbourne’s city lifestyle. With the far left face looking out towards Russell street, I hoped to guide foot traffic out with a strong/confident attitude that is prepared for the hustle and bustle of the world. In contrast, people walking into QV will be welcomed by a more relaxed/contemplative composure which speaks to the feeling of escapism in QV Melbourne. All in all, I wanted to transform the grey-washed laneway into something more vibrant and energetic by fusing the dynamism of bold paint gestures with scale, delicate detail and colour harmony.

Loretta Lizzio
A wall of flora and fauna using warm colours that evoke lush, rich excitement and awe on large scale. Full of effective details that makes the image look like it moves. I would use shimmering gold’s, yellow hues, and a deep masala to create this work.

Merda
QV was the original site of the Queen Victoria Hospital and the place of my birth so the obvious choice for me was to base the design around the word “MELBOURNE” and incorporate diagonal graphic elements to match the lines in the surrounding architecture.
For a bit of fun I’ve included an optical circle for the letter “O” and positioned it so that the public can use it as a backdrop for the perfect photo opportunity.

Pete Cto
This work is a fun, imaginative and creative representation on an evening of Melbourne Dining. The work started as a Photography shoot using coloured lights and through the translation process, different elements were introduced. The fish coming out of the stem of glass and splashing into the water, accompanied by an expression of laughter and happiness provokes the viewer to empathize with her joy.
The Rainbow feeding into the glass aids the imaginative and creative aspects, creating a narrative within the piece. The Black and white Pattern juxtaposes the intense vibrancy of colour and tone whilst adding a contemporary element.
An important factor of interactivity is the Aerosol Can on the far left which has been placed to give viewers and passers-by an incentive to photograph themselves or another person into the piece of art. If chosen, I would consider fixing a real Aerosol Can to the Work for the viewer to take a photo yielding.
About QV Melbourne

Worlds apart from other retail precincts in Melbourne, QV represents the quintessential Melbourne lifestyle. Intimate laneways in the urban precinct give visitors the freedom to wander and discover the eclectic mix of shops, cafes and restaurants at their own pace. QV is home to 120 retail stores including premium fashion, beauty and lifestyle brands.

QV is the redevelopment of Melbourne’s historic Queen Victoria Women’s Hospital site. In March 1846 Melbourne’s forefathers laid the foundation stone for the Princes Bridge and, as part of the same ceremony, a foundation stone was also laid at the Queen Victoria Women’s Hospital (at the time named Melbourne Hospital), making this area of great historical significance. The Queen Victoria Women’s Centre, at 210 Lonsdale Street, has remained untouched during the construction of QV, with the precinct working around the historic building to provide a wonderful contrast between old and new. QV’s principally open-air, pedestrian-only, laneway network provides a rich cultural link to the site’s history, with names carefully chosen to embrace the area’s heritage. The QV precinct is a block footprint of Robert Hoddle’s original plan of Melbourne. www.qv.com.au