“A being dedicated to water is a being in flux.”

Gaston Bachelard, Water and Dreams: An Essay on the Imagination of Matter 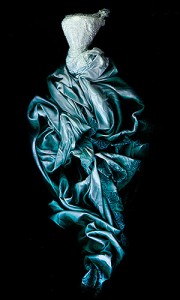 Shakespeare’s infamous Ophelia—broken-hearted, grieving the death of her father—drowns slowly in a river in Denmark. In a state of spiritual collapse, she has fallen from the bough of a tree while collecting flowers. Now submerged, the young woman’s hands puncture the river’s surface like lilies. As she welcomes in death, Ophelia sings, her flaxen dress turning lavender as the water exchanges its initial offering of buoyancy for debilitating weight.

Melbourne based artist, Meg Cowell, photographs undulating feminine garments in, what appears, a vacuum of infinite space. The dresses, rich in hue and excessive in their skirting, are handpicked for their unique and romantic character: “Each garment has to speak to me in some way, to tell me what its wants me to do with it, as cosmic as that sounds.” The chosen articles of clothing are then photographed in a 1000-litre pool Cowell has installed in her inner-city backyard. 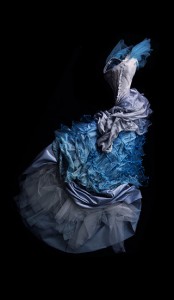 Ritual dress accompanies many important rites of passage. For women, white wedding gowns and Victorian mourning attire are iconic artefacts that carry their wearer from one stage of life to the next. In turn, it is not beauty, vanity or a political reading of fashion that concerns Cowell’s practice. Instead, it is the moment when a woman dons a costume for her transformation that is of interest. For the artist, such occasions elevate garments beyond their materiality to become an embodiment of female ritual.

Cowell’s exhibition, The Sea, The Shore, presents a series of large-scale photographic works that illustrate this shift from garment to artefact. Through sophisticated direction, the artist creates vignettes of unique gowns, lingerie and couture as they bloom into new forms: for example, dresses appear flower-like, floating in the abyss. She describes the satisfaction when clothing abandons its inanimate physicality for a sense of agency: “I think an image is successful when it shows metamorphosis. Good images require a kind of imaginative collaboration from the viewer to interpret what they are seeing.” 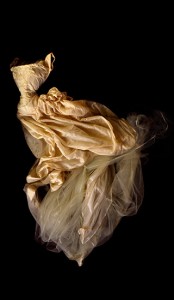 However, it is the body of water (literally, metaphorically) filling each gown that encourages spiritual transformation. Water—as a passage between shelves of land—is inherently connected to transition: mortals and immortals alike have cleansed, purged and even re-birthed here, moving from one tangible or metaphysical place to the next. Although the actual water is not visible in Cowell’s images, it acts as an agent for movement and a deep, almost cosmic, setting for the garments. Inspired by scenes like Ada’s drowning in The Piano and Ophelia’s watery demise, the artist explains, “It’s the Romantic idea of the psyche unanchored and adrift in deep water that fascinates me.” In this way, aqueous infinitude becomes a chamber for the memorialisation of female transition. As woman and outfit are separated, they alight one another, passing through the rigor of ritual toward transcendence.

Laura Skerlj is a Melbourne based artist and writer.