Christophe Stibio is not afraid of the land. He endeavours to plough it mentally. He is determined to go deeper, to explore what is under its skin. His art is the visual and tangible result of a profound mental geology of a country which has both physical and spiritual dimensions. 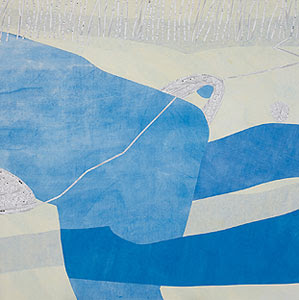 ‘Sitting By Some Drying Ponds, Roberto I Love You,’ 2014, natural pigments, shredded documents and rice paper on canvas, 110 x 110 cm.

On a formal level Stibio’s multilayered landscapes are utterly sophisticated in their construct. Stibio employs Chinese rice-paper, watercolours and shredded documents as applied materials. The use of shredded documents is a recent addition to his artistic practice. Often confidential, these shreds of paper now form crucial compositional elements to the landscapes. They even play a pivotal role in the narratives of the pictures as they become an integral part of an exploration into the essence of the Australian landscape.

That this essence is interlaced with hidden codes is something that we know from the Aboriginal owners of the land. Grids and patterns in Aboriginal art often reveal something about the hidden codes, the journeys of the ancestral creation beings, in the land. Stibio, not being Aboriginal but a migrant to this country, undertakes his own quest to acknowledge these codes in a highly personal manner. 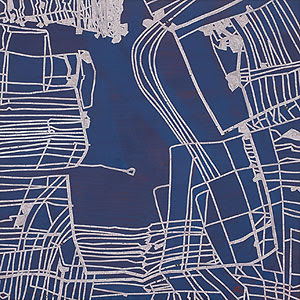 The Housing Commissions, the Primary School, the Silos and the Brothel,’ 2014, natural pigments, shredded documents and rice paper on canvas, 106 x 106 cm

The use of strips of shredded documents to visualise this intense inner exploration and analysis of the landscape is odd and symbolic at once. The very reason that these documents have been disfigured is because they were believed to once contain very valuable information. They were reduced to detritus, a discarded remnant of our highly technical and bureaucratic society. By placing strip by strip in the paintings to slowly create a pattern or a shape, these dismissed pieces of documents once more become a language. A purely visual language that is. The fragments of text and images become senseless, invaluable. Letters become illegible; the numbers lose all context.

By denying the meaning of written words and numbers, Stibio assigns new sense to them by incorporating them into a visual, even musical poem. Lines constitute one of the most important components in these compositions, as they serve to express the land, including its religious aspects. Fields of lines cause the picture to vibrate and ‘sing’ the landscape alive. As a formal element, they present a visual parallel with the art of Aboriginal people in which lines also explicitly evoke their connectedness with the land.

However, Stibio’s pictures are semantically left open. Lines are not there to enclose the landscape, but to imagine it. In this odd, almost coincidental examination of the relationship between language and sign, there are relationships to the land that are constantly being questioned. With the juxtaposition or symbiosis of these mechanically torn paper lines, rice-paper and paint, these pictures almost function as visual metaphors of relationships between humans (our current society) and the earth. In an era marked by global socio-economical and ensuing environmental changes, this is a very timely conversation.

Stibio recuperates parts of letters and numbers and endowes them with a new sense. He reappropriates them to construct meaningful landscapes. This is highly paradoxical given the fact that these documents are archetypically man-made. They are derivations from a society that supposedly has subdued nature to its own needs with irreversible exploitation as its legacy. Documents are also what is used to sell or resell the earth, the land, or to draft treaties on.

The strips of paper stem from a society with a history of imposing extensive and irrevocable change upon things, substituting natural worlds by artificial ones, and in which profound physical and mental altering of environment is inflicted on a daily basis. But also a society in which on a daily basis doubt is growing about the validity of such an attitude given the serious consequences of failures to learn from this history or to assume responsibility over these practices. One only has to think of the profound impact the mining industry has on the environment. This stands very much in strong contrast with the Aboriginal idea of respectful custodianship of the land.

That most of the landscapes in Stibio’s oeuvre are not subdued by humans is clear. Men and landscape are not connected yet in several of Stibio’s pictures. They are in fact, as the title of some works implies, life without humans. Earlier pictures, in which soft tones dominate, such as is the case with the triptych Life Without Humans and Beach no 16, are outspoken landscape pictures. Yet there is an evolution of the Australian landscape to be found, from being unaffected by people, through to the presence of mankind and later radical man-inflicted changes. Scarcity. Lakes Mungo and Arumpo for instance can with its title refer to the the archeological traces of the first humans living on this land, while Flesh of Coastal Fire Trail can allude to the age-old practice of burning down the land to replenish it as well as to the recent malevolent man-made bushfires.

Sitting by Some Drying Ponds Roberto I Love You presents a remarkable symbiosis, a fusing of organic forms of the landscape and the human body. Both merge into a sensual picture which seems to incorporate body parts in lustful embraces as well as rock formations and other natural elements. In this meeting of abstract human forms and organic, living land, the landscape becomes anthropomorphic.

In more recent work (The Housing Commissions, the Primary School, the Silos and the Brothel) the strips are used to demarcate the ways, streets, and roads of the urban setting. These urban landscapes are, contrary to the rendition of natural organic country that employs more of a side perspective, shown from above as cartographic images. Yet organic in form, they show a spreading of a human-made web of streets and ways in the flattened land.

In his work Christophe Stibio shows simultaneously the transient character of a society based on a vision of the short term gain and instant gratification, more often than not to the detriment of the land, and the timeless monumentality

the features of the land. Like a surrealistic partitur of paper snippets, letters, numbers and signs forming the incongruent notes of a eulogy of the land, these pictures let themselves read as rhythmic abstracted maps of landscapes. They are encoded landscapes in which a meeting of different codes takes place that reflect a complex and fragile equilibrium between man and environment, life and resources, natural environment and urbanisation. These pictures are also a strong reminder that no human intervention or interference will leave the landscape unaffected.

Flinders Lane Gallery is currently holding an exhibition to celebrate it’s existence in Melbourne for 25 years.