I thought I would share with you today my personal picks in regard to artists of the figure painting and drawing kind.  One of my favourite Melbourne figurative painters is Jon Cattapan. Jon seeks  to make art that is engaged with the human condition and contemporay society, but also draws influences from Science Fiction and Film. Some of his earlier influences include :Schiele, Duchamp and Picasso. His works often draw on diffferent events and themes, for example,  the theme of fire saw works created on a Footscray chemical fire in 1989 and the burning of the houses of parliament, a historical event. 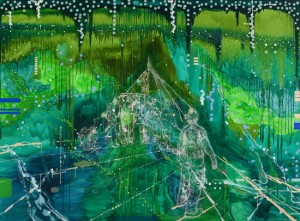 “I see painting as a personal observation of the ironic nature of life”. Jon Cattapan-Artist Statement 1980.

Cattapan on the children overboard affair: “I think its a very particular thing to try to record something like that through paining, to actually make a painting very slowly and absorb the event through the actual act, the physical act of making the work takes it somewhere else.”

In essence, Jon is an interpreter and dissector of events, further reinforcing the relevance and importance of the artist within our society.

I had the chance to view the works of Melbourne native Godwin Bradbeer at the James Makin Gallery in 2013 at an exhibiton called “Pentimenti” The sheer size and grandeur of his works were awe inspiring. The confident and often overlapping lines and perfect balance of the form, extra limbs,  and carfeully rubbed back areas were what struck me. A head confidently extends itself off the top of the paper as is the foot and the hand. This classically drawn woman had an etheral quality about her, almost floating or weightless on the surface. His backgound and knowledge of photography is  evident,   given the perfection and realist elements present with his burnishing techniques and use of Chinagraph- giving him that ‘solarised Man Ray photograph’ quality that he describes. 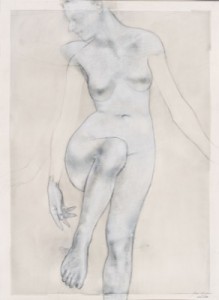 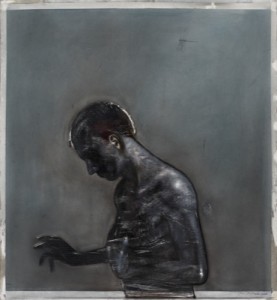 Bradbeer says himself about his imagery, that he is conscious about drawing himself. “This knowledge of the figure is embedded in you. If you understand that and can drag it up then that really can help when you’re having difficulties”.

From his series of works called the “Metaphysical Body”, a survey exhibiton from 1970-2005, Dr Neill Overton sums it up beautifully, “Summarily, Bradbeer explores the mechanisms of Renaissance intent without hiding it beneath irony; in this endeavour he is arguably the most postmodern of artists, unafraid of the figurative language he explores.”(see website).

To summarise; I think that artists have their own language, a visual language that is uniquely their own. How they perceive their reality can affect how they read into and interpret current events to give them greater meaning, relevance and understanding.