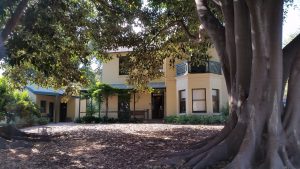 I absolutely LOVED working out of that stunning heritage home during my three month residency. It was such a cosy escape during winter and to break up days of working elsewhere and family life. I think I’m just coming out of what I am calling my post residency slump! One part of me would say at this point: “Don’t stop working-keep going”. The other part says:”It’s ok to take a break, for reflection “. 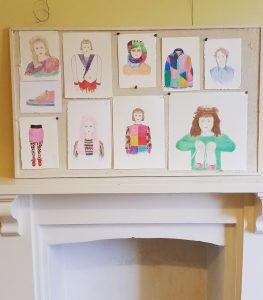 Some of my illustrations -Prismacolor pencil on paper

The fact is, I don’t really enjoy not having a project. I think most artists would agree with me. We always have a something on the side or on the back burner. If not, at least there is always one on the horizon! During this time I have got myself into talking to other artists, going to shows (when possible) and planning my next works. The trick is to get out of the planning stage and into action as soon as possible. Speaking of projects. This 80’s latch hook piece was so much fun to put together. At first I was thinking of 80’s iconography (the question mark and lips for example). I already knew I wanted to utilise the small square rug making canvas that I had in my collection. So marrying the popular 80’s pastime of the latch hook, pom poms and themes worked perfectly. Back in grade 6, I remember making an ice-cream latch hook cushion and a friend doing a hotdog design for our art class. We made the best things in art back then! 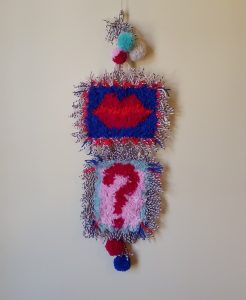 Of course, there are always other factors that can delay projects. Things such as: lack of funds to purchase equipment or little time due to other commitments. All excuses of course! Lack of funds? Solution=find a cheaper version until you can afford it or do something else in the meantime. Lack of Time? Make time=Get up earlier or carve out some mini art breaks in the day. I have wasted money in the past, trying to use the best paper or paints only to abandon the idea anyway. It’s ok to start out small and build up.

Apart from working as much as I could on the 80’s project I also conducted a one hour zine making workshop at the Springvale Library. Most kids were content to do their own thing. A couple took advantage of the fact that I bought in my very cool 60’s Tippa Typewriter and a few used the cut outs and stickers in addition to their drawings. There were about 15 kids under 12 all up. It was a super busy one hour show! 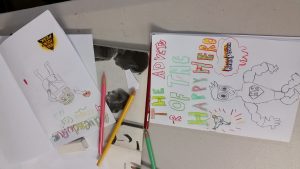 Kids getting creative at the workshop 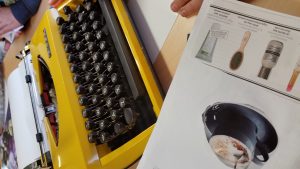 The Tippa got a bit of a work out