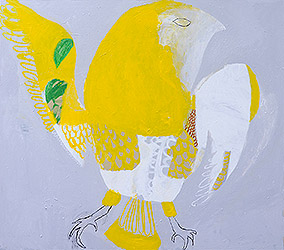 It is both a rare and sweet occurrence that within the busyness and blur of everyday life that one can harness pure escapism and withdraw into a fancied solace. Laden with symbolism, spirituality and imagination, Karlee Rawkins achieves just that as she weaves colour, line and pattern with her interpretation of what lies within her personal sphere.

Heavily inspired by Indian Hindu tales and motives, Rawkins presents to us in her latest show, Never Never River an insight into her thoughtsof sacredness and ritual. 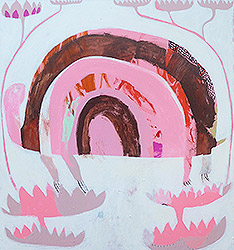 Based in the beautiful mid-north coast of New South Wales, Rawkins has a vast and rich landscape full of luscious plant and fauna specimens to influence her practice, yet her creative mind meanders as she seeks to create her own exotic kingdom.

Building upon painted layers of patterning, scribbling, line and colour, compositions arise within an intuitive act of mark making. Patterns are derived from plants and flowers that have been used in Indian design for centuries, with noted Buddhist and Hindu sites dating back to the third century BC.

It is drawing from her surrounds and by mimicking the patterning to which she is exposed, Rawkins is enabled to construct her own unique dreamt oasis. She describes her use of pattern as an aid in the creation of ambiguity within her compositions; she also directly references historical repetition from ancient religious decoration and design. 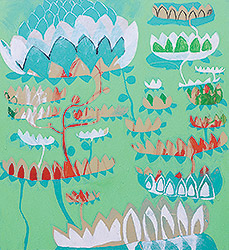 Although her Never Never River is a place of fantasy and invention, her landscape is inspired by the very river that runs along the rear of her rural property. Most wouldn’t be familiar with this pristine waterway, but Rawkins acts as witness to the life that it sustains. Water, therefore, plays an integral part in integrating her works as they come together with colour and contrast.

The metamorphic characteristics of her devised creatures are reflected in the transformative nature of the river which many of them inhabit. Lotus flowers bloom and wilt while their roots tangle with the changing of the current, turtles wade through and feed from the shallows which rise and fall, and birds circulate the air above, following the river from its source to the sea.
Rawkins’s painting Croc Spot invites the viewer in to her own personal water haven as she illustrates the way she visualises the river surface – a sheath of lotus flowers, blossoming and blooming and full of vibrant colour. The sacred lotus, with its expanding petals represents the expansion of the soul, and it is by illustrating and articulating her lotus imagery that Rawkins ‘explores notions of purity and non-attachment.’ 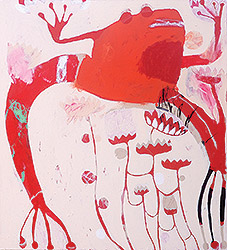 For the work Snake Catcher, Rawkins references the Garuda – a Hindu god, which exists in the form of an eagle, acting as messenger between the gods and man. The Garuda features prominently in both Hindu and Buddhist culture, and is often depicted on monuments and overlooking communal spaces.

Rawkins rendered her golden Garuda to be central in her imagined landscape. A harmonious relationship between her mythical and allegorical creatures allows one to slip beneath the surface and enter into her world of the sublime. It is a landscape that feels at once familiar yet undiscovered, where crocodiles and turtles, embellished with lotus patterning and coated in striking colour, find form in amongst her intuitive and gestural painting process. 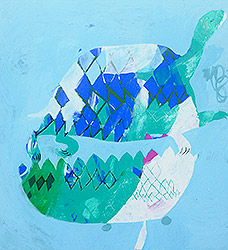 Whilst Rawkins admits, ‘There are always quite a few personal references and metaphors for my life and experiences intertwined in my work,’ these poetic notions are often cloaked by the visual display that she depicts. Taking this into consideration as one admires her works, it could also be said that the theme of transformation underlines her exhibition in its entirety: as a homage to physical place, to the Hindu gods that inspire her own mythical creatures, to the imagined landscape that she has spawned, and within her sense of self upon completing a laden body of work.