Andy Rijs’ contemporary still life paintings are a playful and telling narrative of a personal journey. Exploring themes around gender, sexuality and the abject body; the totemic compositions and vivid colours capture the essence of the artist as they are now. Coming from a practice that embodies the skill of using highly detailed, realist painting techniques, Andy’s portraits have been finalists in numerous prizes including the Rick Amor Self Portrait prize. The artist was also the winner of the prestigious Northern Rivers Portrait Prize in 2010. 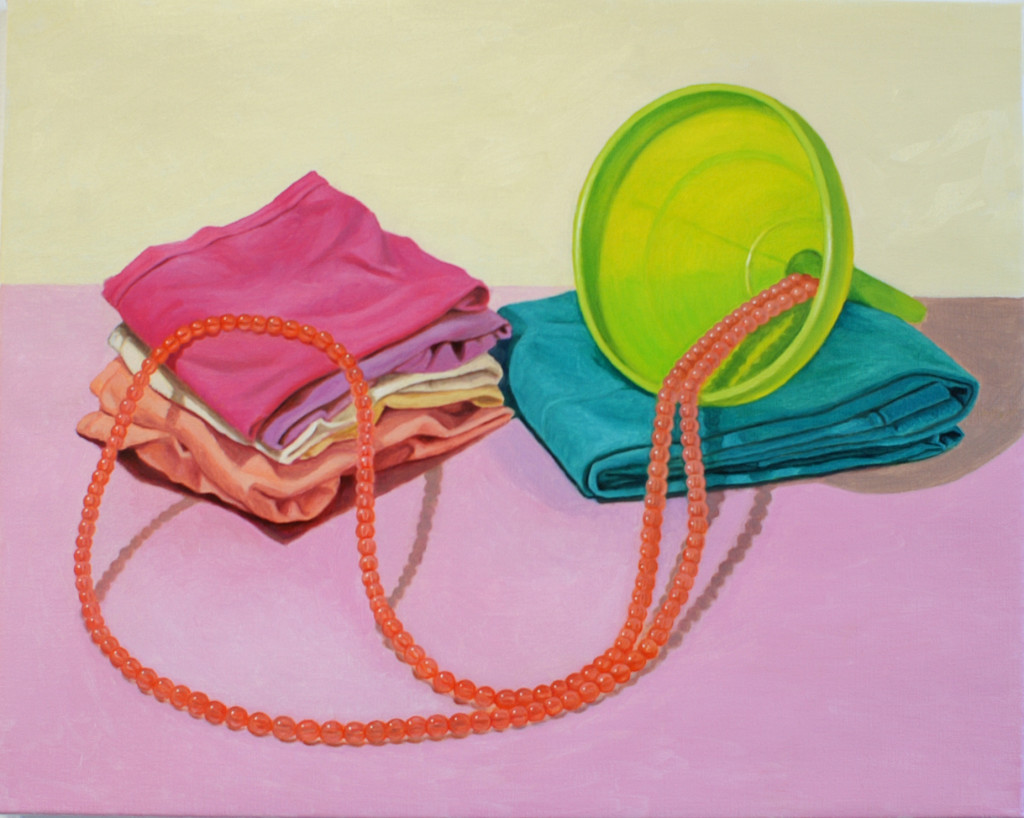 Your still life paintings are quite removed from your realist portraits of the past several years. Was there a ‘trigger’ for this kind of representation-or was it a range of ideas coming together?

Painting from the still life is a relatively new thing in my practice. For a long time I painted solely from photographs, however one of my frequent criticisms when I first started at the VCA was about my use of the photo reference. I remember my very first tutorial quite well, as the lecturer posed the question, ‘if it is already successful as a photograph, why turn it into a painting?’. I realise that this question was simply intended to have me think more critically about the way that I worked, but it had quite a strong impact on me, as the more I thought about it, the less I felt able to resolve that about my work. I actually went through a bit of an artistic crisis soon after this point! So I guess you could say that this was a ‘trigger’ for me, as this was a pivotal point in my practice, where I took a rather dramatic shift in my work. This was when I decided to start painting from life. Painting from life turned out to be more of a challenge than I had anticipated, after feeling that I was able to perfect working from a photograph, but this was a challenge that I needed, and came to love. My very first painting from life was the self portrait The Desperate Man, that I entered into the Rick Amor Self Portrait Prize. I was not expecting that I’d get in, but an artist friend had encouraged me to enter. I was over the moon when I got the letter in the mail informing me I was a finalist. That was what gave me the confidence and the drive to continue working in this way. 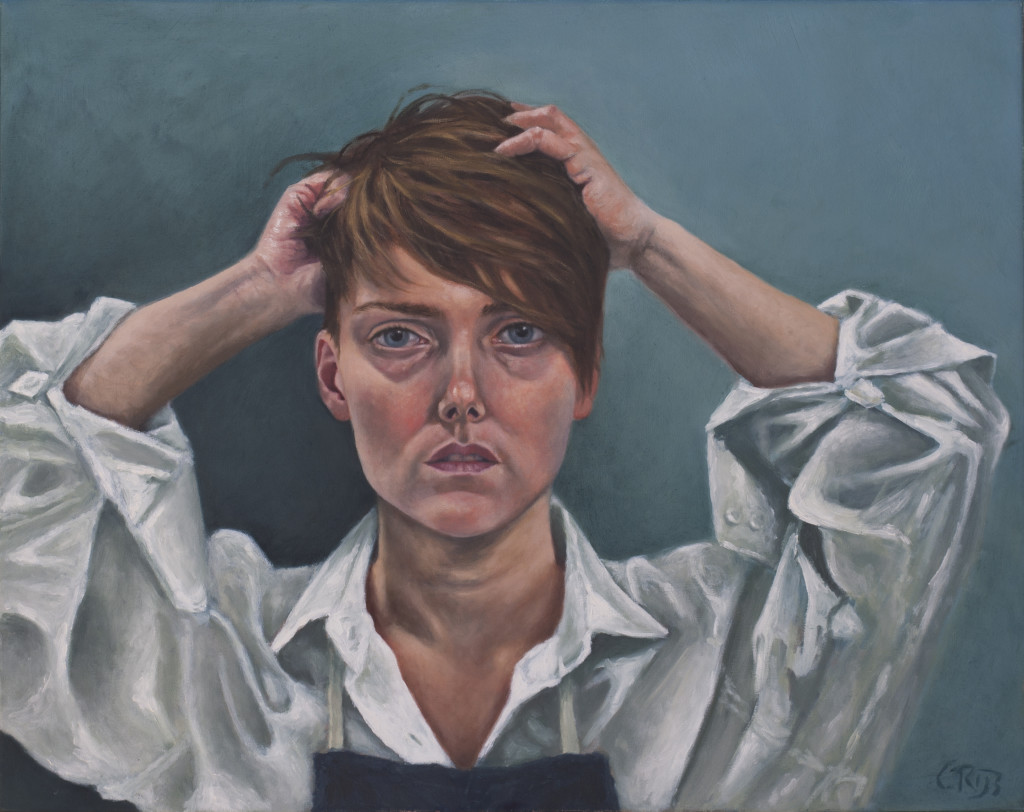 Your use of colour seems just as relevant as the theme surrounding the everyday objects. How did you go about deciding your palette and the style you employed in painting them?

Certainly, my use of colour is an important aspect of my work. This is something that I feel was lacking a bit in my work previously. Anyone who knows me, knows how much I love colour. The turning point for me bringing more colour into my work was when I started studying colour theory, through my artist friend Eolo Paul Bottaro. I often refer to him as the ‘master of colour’. He taught me about the tri-chrome system, which is a system of painting that involves the use of just three primary colours, and white. I decided after doing a workshop with him to challenge myself and create an entire body of work using only the colours arylide yellow, pthalocyanine blue and quinacridone magenta, mixed with zinc white. It’s amazing what you can do with only these three colours. I wanted to test myself as much as I could, so I started finding coloured objects all around my house and studio to arrange into still lifes. This was the beginning of what has become an integral part of my practice. 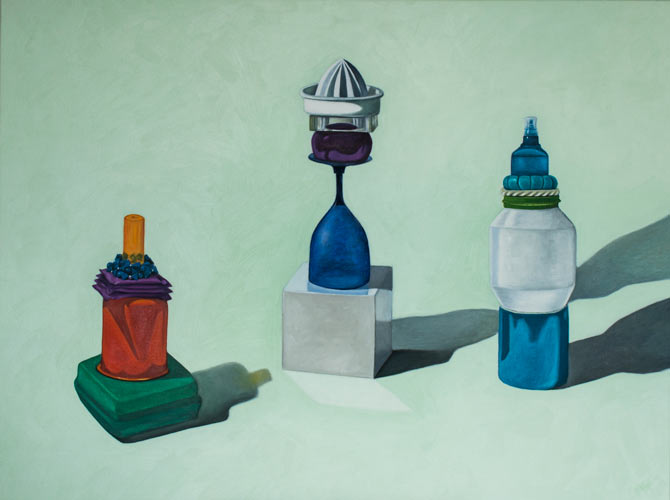 You were painting before embarking on a degree at the VCA. How has the journey down the academic path influenced your work?

It has influenced me in more ways than I could possibly articulate. It has truly been an amazing journey. I never knew what I was in for before I started studying at the VCA. I had thought I was just going there to get that bit of paper that I needed to be taken seriously as an artist, but it turned out to be so much more than that. The first year was very tough, as I had never really had anyone ask the kind of questions about my work that got me really thinking critically about what I was doing. I had walked into that place after a long time of practically living in a bubble, where the only feedback I ever got for my work was about how great it was. No one ever challenged me, or questioned why I worked the way that I did. When I started there I had a massive ego, and didn’t know how to take a critical response to my work. It took me some time to get to the point where I appreciated the feedback that I was getting from my lecturers. Now I can’t get enough of it. The one thing that I am going to miss the most about the VCA, now that I am graduating, is that regular feedback on my work. I have valued that above everything else. 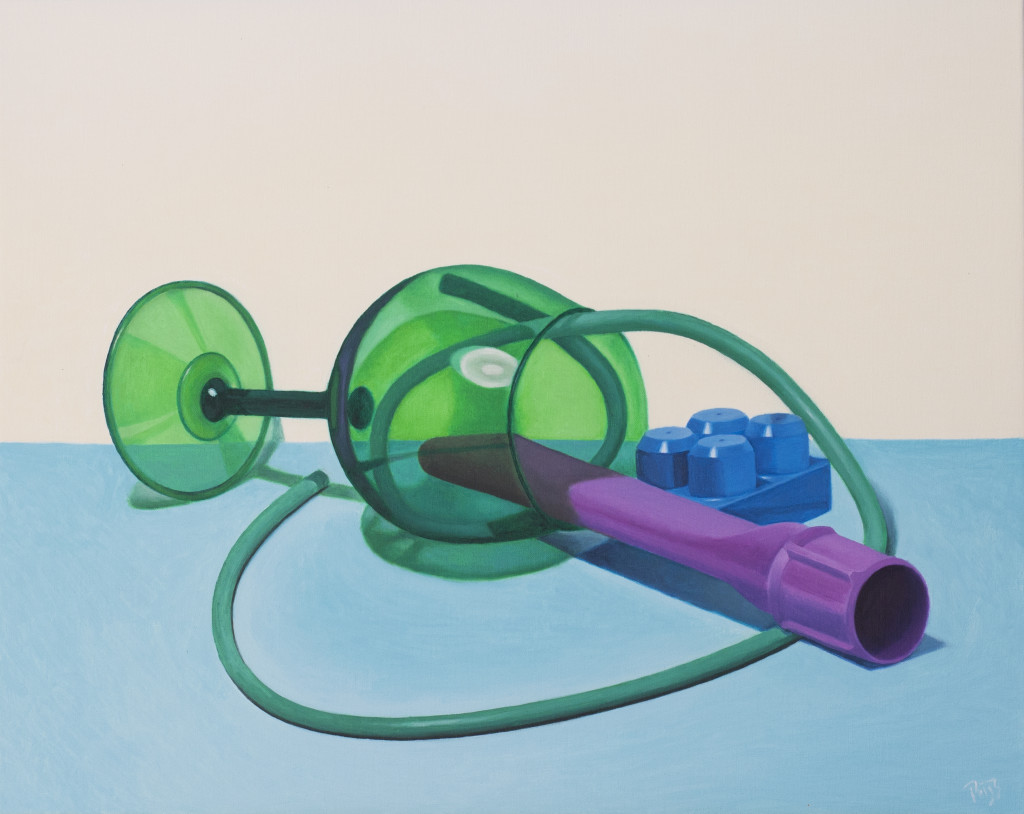 What art movements or particular artists have influenced your latest works? And are there any that have been strong in influencing your journey around gender?

My work is very much influenced by my own lived experiences, probably more than anything else. However, there have certainly been a number of artists and movements in art that have influenced me in some way or another over the years. The one movement that has had the most influence on me, in particular when it comes to my experience of gender, has been the feminist art movement. I have always had a strong interest in feminist art, since I first stumbled across it in an art textbook as a teenager. As someone who was assigned female at birth, who also had a fairly conservative and traditional upbringing, feminist art spoke to me on a level that no other art ever had. It opened up worlds to me. I saw possibilities and means of expressing things that I otherwise kept buried deep inside me.

As far as aesthetics are concerned though, Giorgio Morandi is one of the artists who have had a major influence on my current arts practice. An artist mentor had introduced me to Morandi’s work a couple of years ago, and this was around the time when I first started painting from life. Although his paintings are not near as saturated in colour as mine are, his approach to painting the still life interests me. This artist dedicated his life to the still life, and created work that even now, many decades later, still looks contemporary. 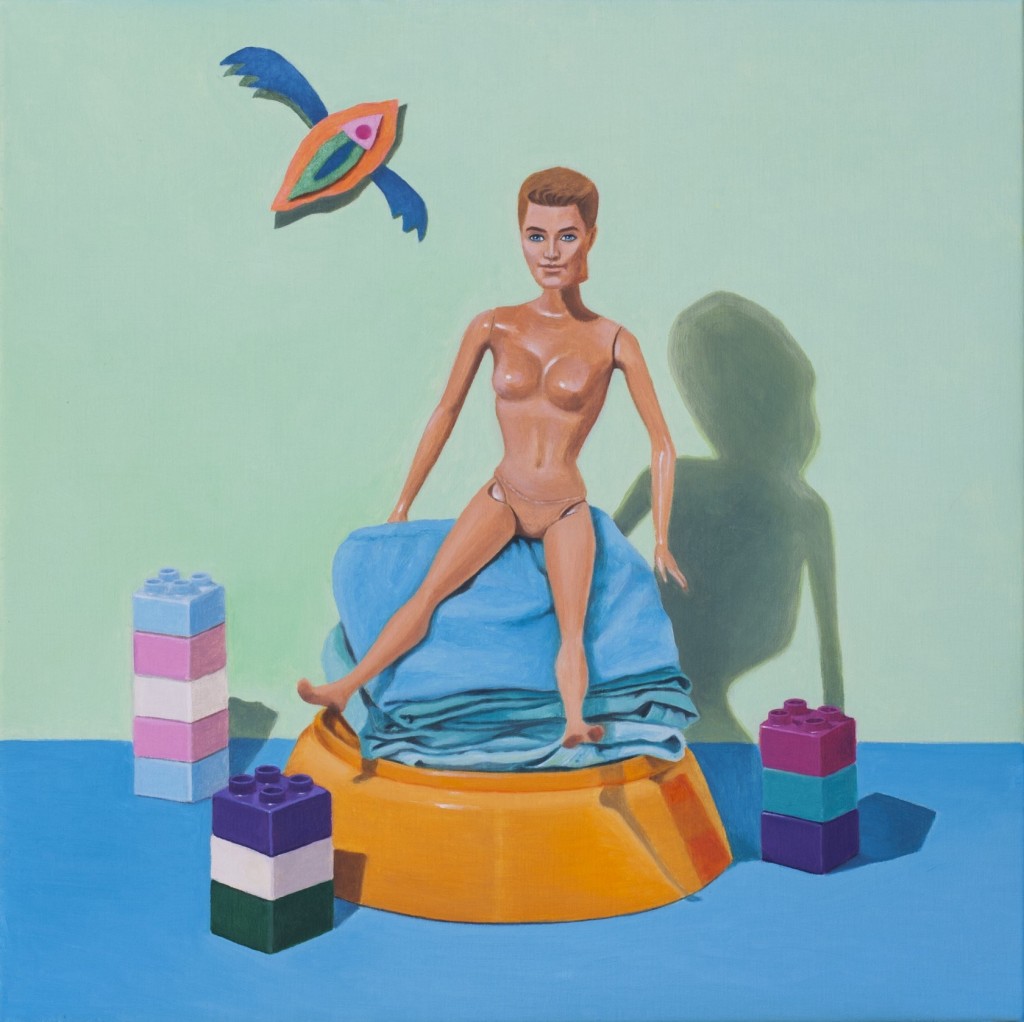 Would you say these personal and relatable objects, come together to form some kind of portrait of the artist?

Most definitely they do. My still life arrangements are very personal, and reveal more about me than any of my work did previously. Perhaps ironically, when I first started working with still lifes, I had been trying to take a step away from creating work that was very personal, but I ended up revealing even more of myself. In a sense, you could say that many of these works are self portraits, although they were not necessarily intended to be read that way. Some of my works are more transparent than others, but I generally like to only hint towards certain readings of the work, weaving my own stories and narratives into the still lifes, while also keeping my paintings as light-hearted as I can, and open for interpretation. 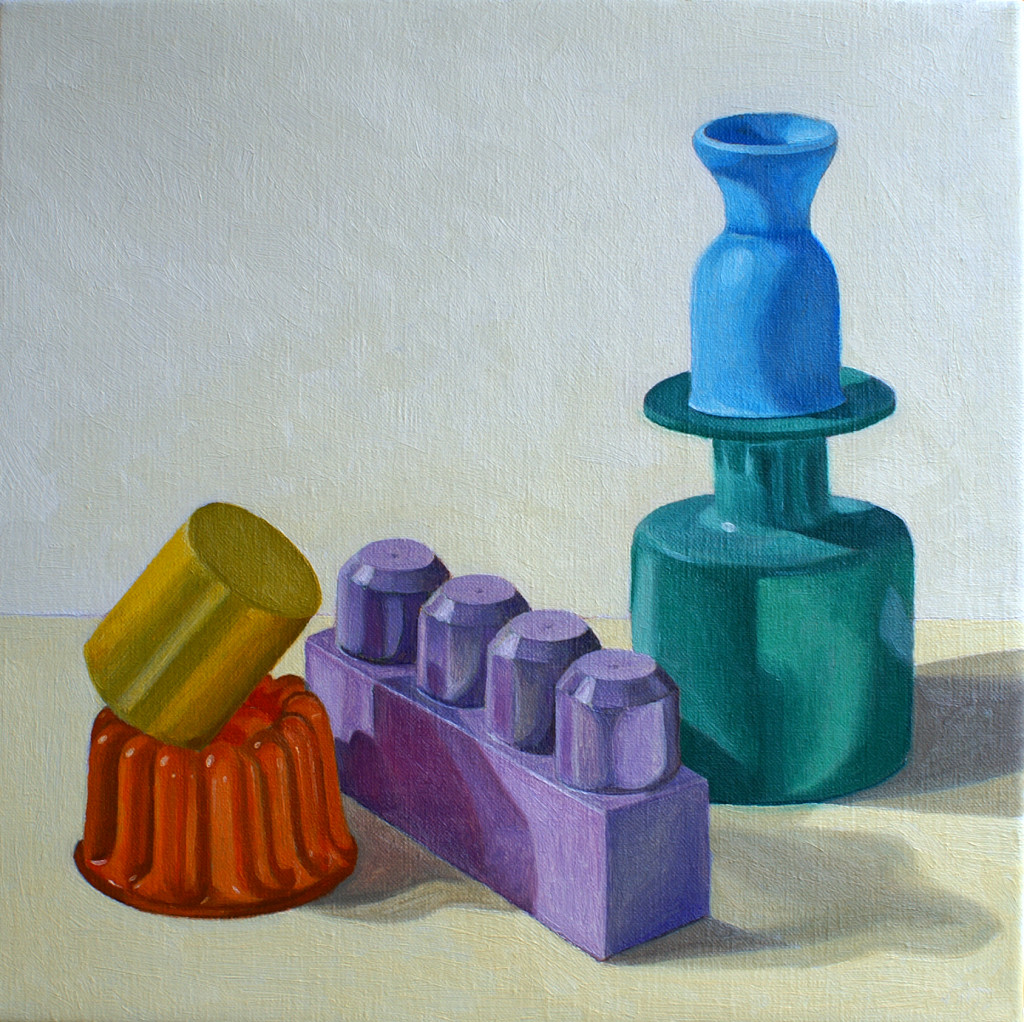 Do you think the painting journey for you has been a kind of catharsis-or necessity in becoming more of who you are?

In some ways it has been. Certainly it has always been a necessity for me to either paint, or get things out through other forms of creative expression. I don’t know who I would be if I were not an artist, it is so much a part of who I am. If I’m not painting, I’m always expressing myself in creative ways through some other means. I can’t imagine myself ever not working in some kind of creative industry. I’d always have to have an outlet. Having the ability to express myself through a creative outlet is the one thing in life that has always kept me going, no matter how tough times have been. 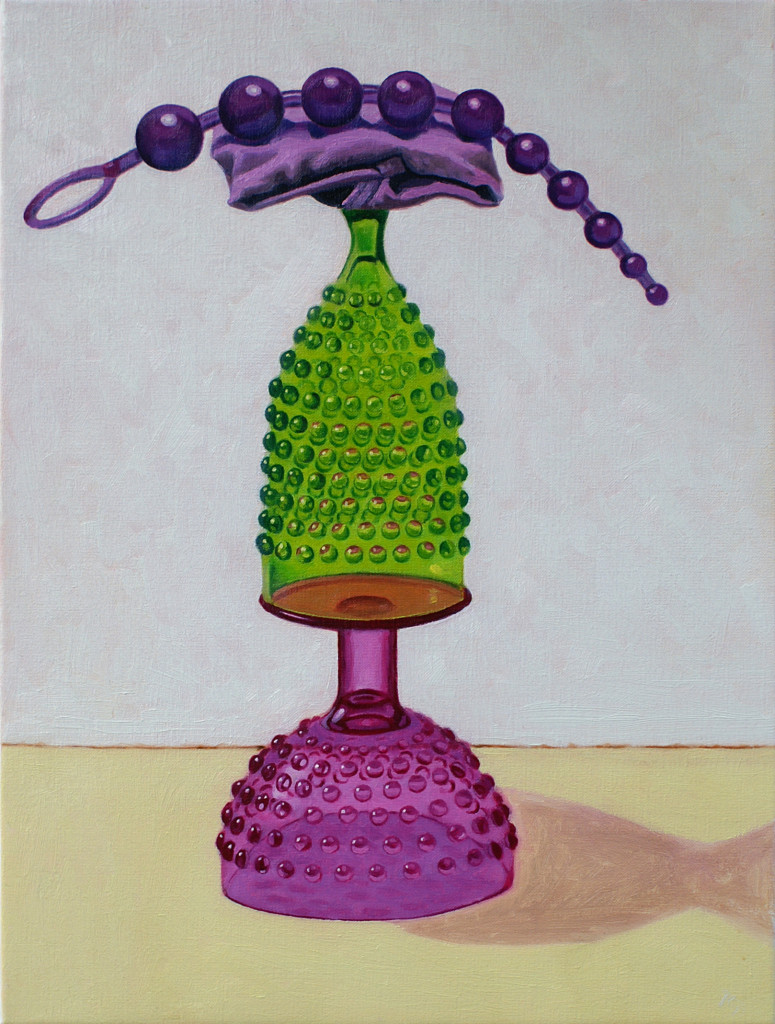 What are your plans for the future in regards to your work?

My only real plan is to keep doing what I am doing – making art – and hopefully other people will like my art enough that eventually I will be able to earn a living from it.