Hi Everyone! Sorry for the blatant alliteration there. I could not help myself!

Now that I’ve got your attention..

Things have been going well at the new studio. Check me out on instagram for updates! However, whilst doing some cyber cleaning -I stumbled across an old article that I wrote but never published about a much older subject and that is; my childhood love of the mixtape. It fits in so perfectly with my 80’s project. Anyway, I have it here for you to read-so enjoy all you lovers of the mix-tape!

PS. Be sure to check in next week for a give away to my subscribers 🙂 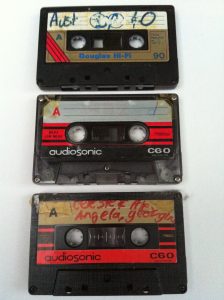 Back in the Day: Mixtape Memories

REWIND… back in the day as a young girl living in the Eastern Suburbs during the 80’s, I considered myself a bit of a mix tape queen. I started out making little recordings with some friends. Our own mini plays about a rabbit running away were a big hit, along with making up adverts about incessant farting, or whatever else gets a seven year old in fits of laughter. Every now and again, my early DJ handiwork would mean interspersing the commentary with some popular music that I would record off the radio or from the other side of the double deck (when those long hot pink elongated beasts came into fashion).

FAST FORWARD…a year or so later I graduated to making mix tapes from popular radio stations such as ‘EON FM’ now known as ‘Triple M’. I would delight in taping one hit wonders and more popular tunes from the likes of Prince, Madonna and Eurythmics. These were mostly gleaned from Casey Kasum’s ‘American Top 40’. The artists and songs were then carefully scribed on the tiny lined cover with a biro. Proudly, I would often carry these around to friends’ parties and gatherings, delighting in my mixing expertise over red cordial and twisties.  Later in early high school, I remember discovering stations like 3RRR, where I could hear and record songs like, “Fish heads fish heads roly poly fish heads…” and replay them over and over again…Stop, rewind, play…stop, rewind, play….

Unfortunately, without special care, the mix tape was doomed to live a short life with the thin tape easily unfurling. I recall seeing them wrapped around trees for some reason at times. Despite efforts to splice and stick or tie, there was little chance of resurrecting these, with many a tape deck regurgitating them, never to be played again. These were great and sometimes frustrating times. Sadly, I no longer own a tape playing apparatus, except for one in the car that likes to chew them up. But quite possibly, there is an old TEAC or SONY one kicking around my Dad’s shed.  And the odds are that the clear plastic cover is broken off and a coat hanger is where the aerial used to be..