Although ‘born inspired’, it was after the birth of his first child that Joel (known about the traps as ‘Mulga’) decided to take his art even more seriously. His wife Sarah relates how he is basically unable to sit still and is either drawing compulsively or wandering around the lounge room with his guitar. “I don’t really watch TV, you’ll be dead before you know it so you may as well do something positive with your time”, he explains. His dad recites poetry and loves to be out in nature and his brother Eden or ‘Emoo’ is a barman and artist. His other brother Kieran, is a wedding photographer and co-band member of Joel’s other project, ‘Mulgas room’; so it seems like a natural path for this 30 year old. The catchy name of Mulga was a nickname that has carried on from his school days, taken originally from a Banjo Patterson poem. And like Banjo, Mulga likes to compose verse either for his band or poetry that marries along side his varied characters that he creates.

Joel, who surfs regularly in Sydney’s Cronulla, says that he is influenced by a number of artists, especially with a ‘cool style’ including Sydney based mural artist Beastman and others involved in the skate or surf culture. Drew Brophy is also another artist that utilises the ‘Posca pen’ that is one of Joel’s most useful mediums.  Melbourne based Kirra Jamisson is also someone Mulga admires for her careful attention to detail and marvels at her application of the little vinyl pieces. He is currently coming up with designs for a surf club, expanding on his t-shirt designs and prints of his originals and has also started to put designs on skateboards.  A recent exhibition in nearby Cronulla at Space 44 earlier this year saw Joel sell a large number of original artworks and T-shirts.

Mulga has a little bit of a beard obsession and one of his latest works of a viking shows a happy looking chappy with horns and a beard, showcasing his pen handiwork beautifully. Other characters centre around creepy sea farer zombies or silly sausages, meaning there is always an underlying humorous tone in his illustrations.”I like to make people laugh” Joel says warmly. Furthermore, being a little bit Maori, there is definitely a tribal element to his line work and compositions.

So what’s in store for the future? Being that Mulga has been carefully journaling his cheeky characters along with poetry and quotations for so long now, there is a possibility of looking at putting together a Children’s book in the future. He also wants to set up shop at Sydney’s Bondi Market and be involved with more exhibitions. A financial planner by day, he battles sometimes between being able to play gigs with his band and the drawing; but for now, the drawing reigns supreme, to the delight of his audiences. You can find out what Mulga is up to on a regular basis here: 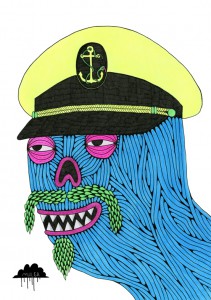 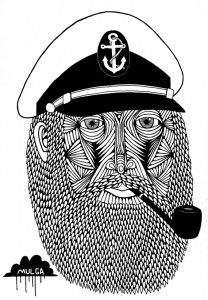 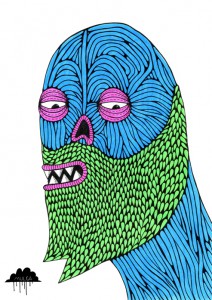 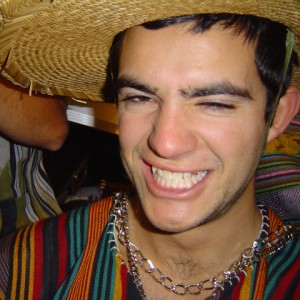