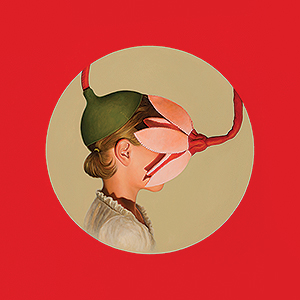 Transgressing the traditional image of mother and child, Hastings charts the complexities and contradictions of motherhood, where emotions see-saw between ambivalence, affection and aggression.

Hastings was a finalist in this year’s prestigious Archibald Prize, as well as being a finalist in the Sulman Prize. Her first exhibition at Flinders Lane Gallery in 2013 ‘Disquiet,’ was a sell-out.

‘It is difficult for those of us who haven’t experienced motherhood to understand the complexity of the emotions it engenders. Exhaustion and sleep deprivation go hand-in-hand with profound, selfless love and the powerful instinct of protection. Yet these widely discussed and socially accepted parts of the role are much easier to express than the anxiety, feelings of inadequacy, anger and guilt that most mothers face at one point or another. Rebecca Hastings’ work speaks of the uncomfortable and often conflicting emotions that can accompany motherhood, employing humour and a generous sense of play to diffuse darker themes that permeate her paintings. 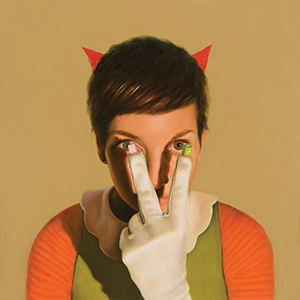 In The Other Mother, Hastings paints her children, herself, and even the family dog posed in a strangely dislocated space. The artist reveals a keen sense of theatrics in the way she goes about composing her pictures. Strong directional lighting casts deep shadows, as seen falling across her face in the self-portrait Are These Yours? Isolated from any surrounding context, Hastings stages herself and her kids against a plain backdrop, looking out at the viewer with wide eyes and blank expressions. Delivering silent monologues from an artificial stage, these unconventional family portraits resound with an uncanny tension.

This is partly because despite the artist’s highly realist approach expressed through fine surfaces and perfectly modeled three-dimensional form, there is an unnatural quality to the works that is essential to their subtext. In meditating on the complexities of motherhood, a role that is traditionally perceived as the most natural of female occupations, Hastings has removed the familiar signs of spontaneous energy we naturally associate with images of children. Conversely she has staged them – with great care and sensitivity – to give voice to a spectrum of experience devoid of the usual sentiment. It takes some courage to depict an ambivalent and emotionally detached side to the universal mother archetype. 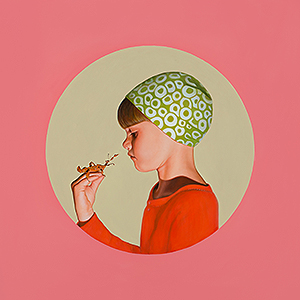 Yet there is an element of fun in these works that provides a welcome counterpoint. Drawing upon that common childhood experience of playing dress ups, Hastings poses herself and her two children wearing a variety of accouterments; flower hats, white gloves, lego and other domestic detritus all appear.

Their significance varies from piece to piece, yet the most amusing use of a prop appears in her painting of the family dog, posed wearing a pair of frilly underpants looking over his shoulder sheepishly to eyeball the viewer. Titled Because He Can, Hastings was inspired to paint it after witnessing her daughter dressing up their new family dog in her own clothes. It perfectly reflects those random moments of chaos and hilarity that kids so easily conjure.

In this and other works in the exhibition Hastings introduces bold, flat areas of colour. Large dots appear, as do circular portals within broad fields of colour that frame her figures. This serves as a vivid and decorative contrast to the illusionistic representation of figures in earthy flesh tones, as seen in She left us at Ikea and went off to find herself (green and pink). In this work the dots also refer to the play areas at Ikea that are filled with coloured balls, where parents can drop off their kids while they shop. Peering out from this artificial space a boy addresses the viewer with a sidelong, accusatorial stare, one that appears in many of Hastings’ works as she deals with notions of maternal guilt for craving time alone. 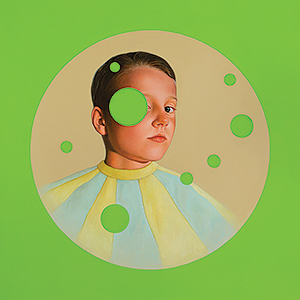 It is this multifarious territory that Hastings painstakingly depicts in The Other Mother. Laced with beauty and humour, unsettled by a silent angst.’