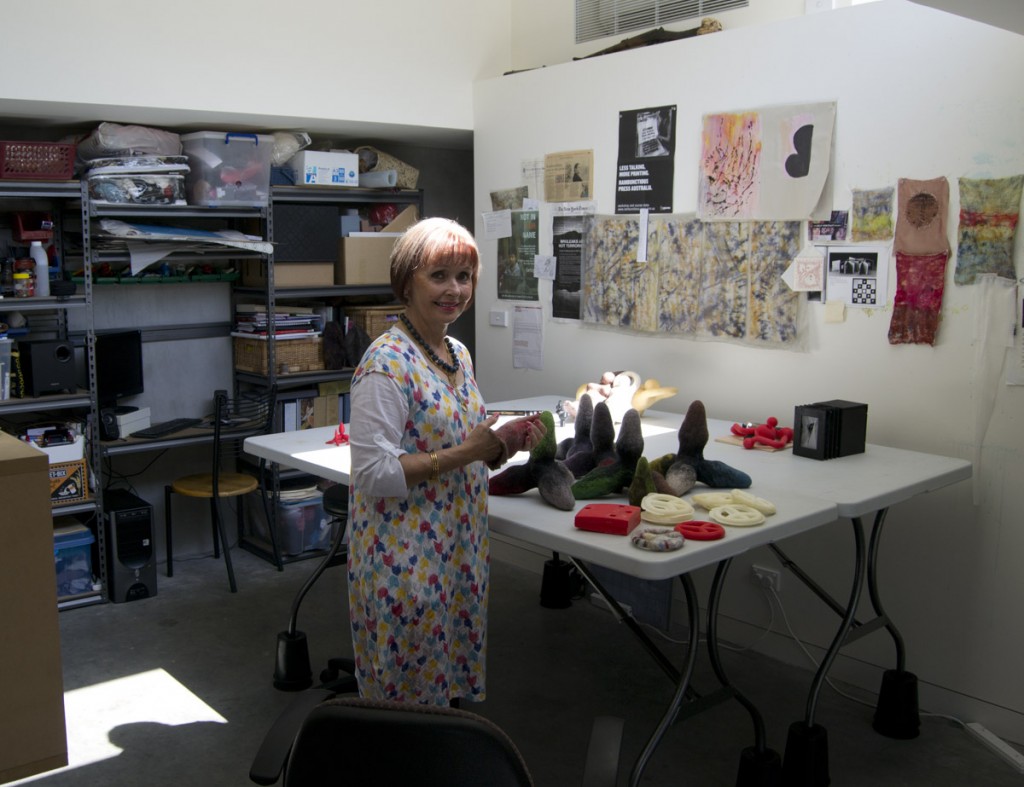 Sarah in her studio

At the rear of a majestic inner city terrace is the highly organized working studio of mixed media and fibre artist Sarah Louise Ricketts. A table displays the varied sculptural works created from felt, silicone and Monster clay, (as I am soon to discover). With many years in computing prior to launching herself solely as a practicing artist and teacher, the 3D printer present in the space seems a logical addition to her practice. “I wouldn’t say I have a mathematical brain, but it’s definitely a logical one. I can do things step by step rather well”,she says.

Sarah talks me through the process of how she came to make the moulds for the ‘Tetrapods’ that set the tone for her up-coming exhibition; “Play-Pose-Post”. She explains that Tetrapods are an engineering marvel used to create breakwaters and even new land, such as The Palm Hotel in Dubai.

How did you form the shape?

A model was made of the single Tetrapod ‘foot’, from wire and aluminum foil, covered with plasticine. The form was then cast using silicone to produce the mould.

What is it exactly that inspired you to make them? Is it because it is a functional object (as used in Dubai) or more about the elements of shape and form?

The pieces were made as part of an exhibition called ‘Feltportation’. Whilst reflecting on the concept of transportation, I tried to recall times when I had been delighted by the sight of something (a transportation of delight). Seeing Tetrapods being cast and used whilst we were living in Dubai was such an instant. The work flowed from that point. 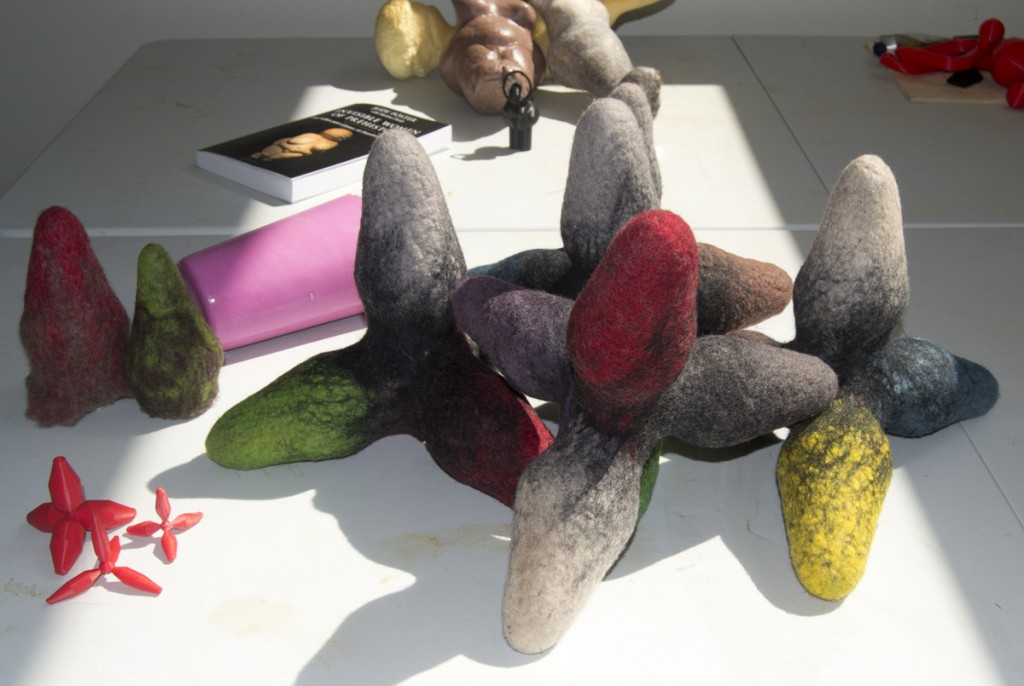 Tetrapods. The small red ones created by the 3D printer.

Another thought came from the same source: that for children, the transportation of delight is often a toy. The idea of an “art toy for adults” was born. The two ideas seem to mesh together rather well. 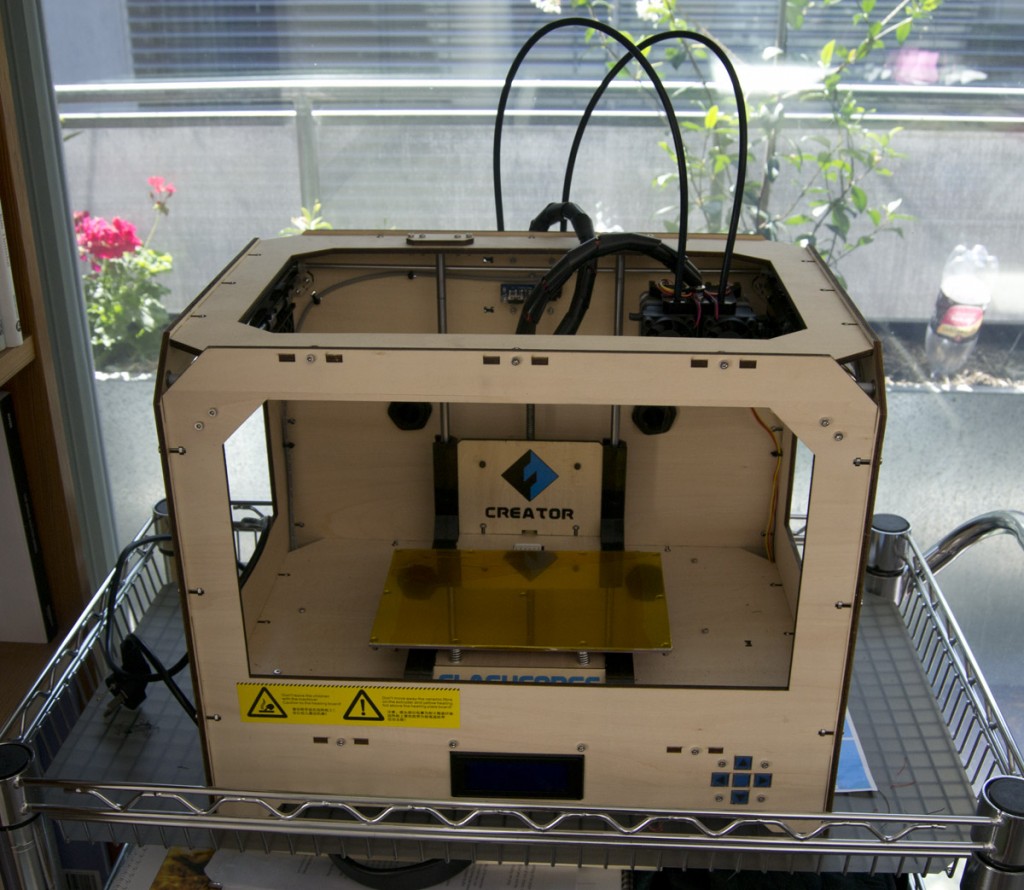 I have always wanted to include my digital skillset in my art. This proved rather difficult when working with the oldest method of making textile, i.e. felt! However, with the advent of 3D printing, I will be able to produce a greater range of shapes and moulds to use as bases for soft sculpture.

When did you start working with felt and why? Is nunofelt your predominate material? What other textiles have you worked with and do you mix with the felt’?

I became entranced with the colour-blending painterly qualities of felt in the last year of art training. When the wool fleece is combined with a woven matrix, a beautiful, drape able fabric is produced, called ‘nunofelt’. For much of the past 12 years, I have worked with nunofelt, although a few years ago I began to go over to what I call the ‘dark side’: working in freestanding 3D forms, using hand-made felt, largely without the fabric matrix. 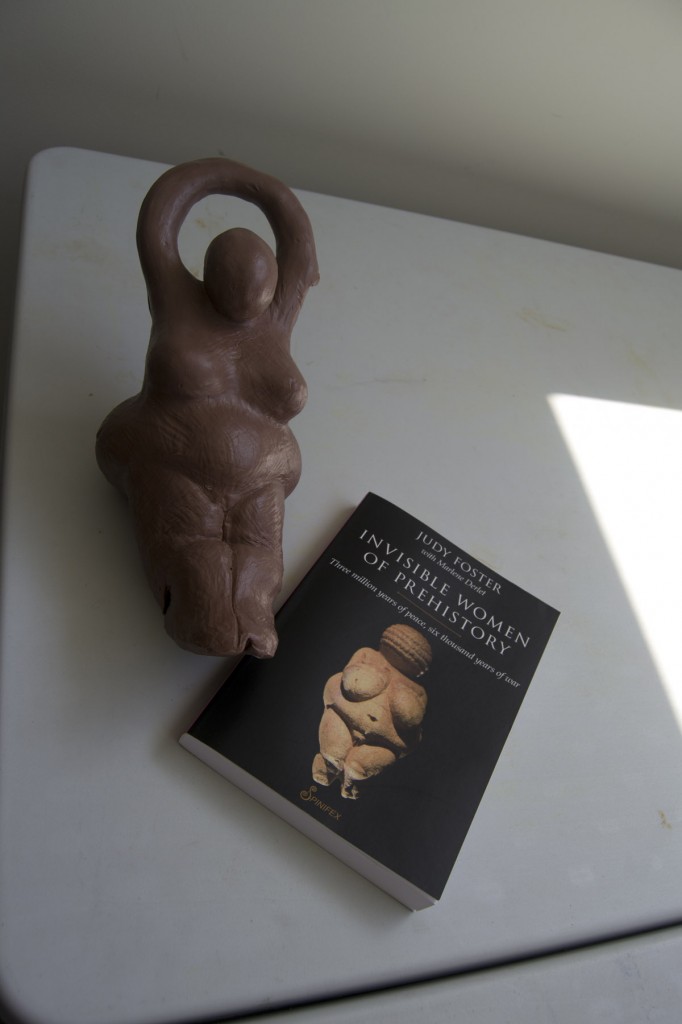 A work using Monster Clay influenced by a prehistoric sculpture

You said that you suppressed the art making side of yourself for a long time. Did you make things as a young person?

I stopped trying to make art in my twenties. Nonetheless, I have never not made things, but sublimated the impulse into various forms of craft and handiwork, renovating houses and so on, for a large part of my adult life. I began drawing so young that I cannot remember starting. My father, an architectural draughtsman at that stage, brought home plans and I would paint them with watercolours for him. I would have been about seven.

You use a variety of materials to create your sculptural works. How did that evolve?

The sculptural work, as with a lot of what I do, has a habit of evolving and moving into directions I am not anticipating. The desire to create reliably duplicated forms as a base for being covered with felt began with learning rudimentary sculpting techniques, which then led to learning casting and moulding with resin. Soon followed the desire to scale up and down on my computer rather than having to make a whole new thing; which led to 3D printing. I can now do nearly all of the above using that method! Along the way, I have investigated and tried out many different materials such as; Monster clay for modeling, various silicones for casting and two-part foams for creating forms. One of the joys of working creatively with materials is investigating them creatively.

Would you say that the wall hangings you have made are a way of story telling or a ‘journey’ as each section is carefully hand stitched over time?

The wall pieces investigate stitching as a mark-making and a textural possibility. The daily stitching that you saw were essentially a documentary exercise, not so much of story, rather something more akin to the pens and paper that record inner tension or brain waves. 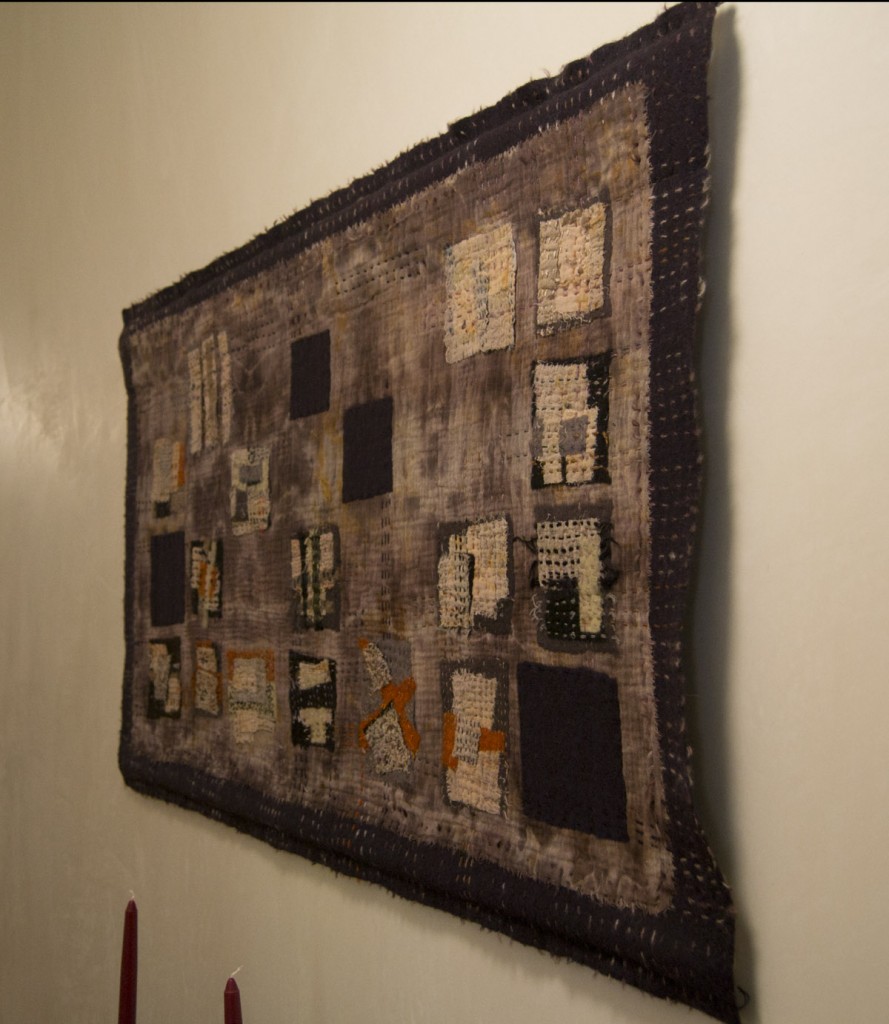 One of Sarah’s wall-hangings in her hallway

What are the main motivations for people wanting to learn the art of felt making? What have been the experiences of some of your students?

Most people who become felt makers fall in love with the materiality of hand-made felt. Sometimes it is a general adoration, sometimes a specific desire to make certain something. Once the path is started the only way to learn is to periodically do a workshop or participate in a supportive group, such as the ‘Felting Frenzies’ run by the Victorian Felt makers Inc. Although I taught in the Diploma of Textile Arts program at TAFE (and staring this year, a similar private course at ‘Opendrawer’), students worked in whatever textile/fibre medium/method they wished. Sometimes this might be felt, sometimes not. 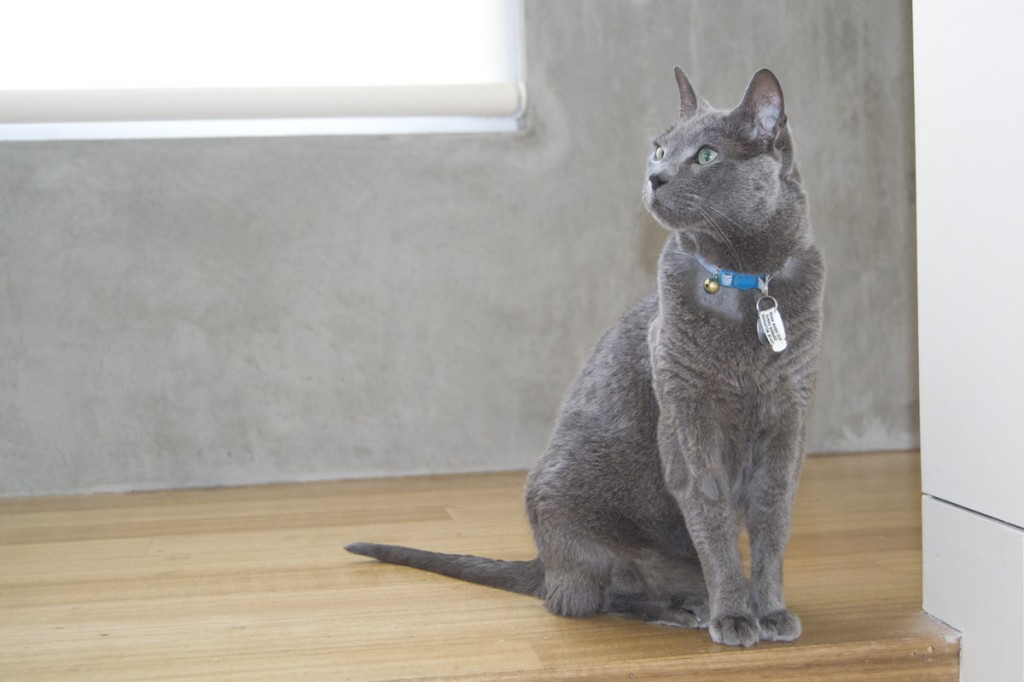 What can people expect to experience at your exhibition?

Well, it will be a great way to experience some hand-made felt, especially for those who have not encountered it before. Many people think felt is just the machine-made squares of fibre kids cut up and make into finger puppets. It is actually a very sensitive medium, capable of transmitting the artist’s touch to the hand of the person holding the work.

Play – Pose – Post is an installation which carefully responds to the gallery space within which it sits: the Tetrapods upon their table, poised and ready, the whole environment supported by a soundscape created from the various ways in which people and children play. Within this supportive space, the viewer is invited to do that which is usually prohibited in the gallery setting: to touch and actively engage with the work. Arrange them and photograph the result. Post the image on the social media platform of choice. Identify the source for the image as #giantsjacks. Liberating. Play as the antidote to fear and restriction.

The digital side of this installation will then aggregate the image into the stack of images on display in the gallery, through seamless use of technology. This, in turn, becomes a new collaborative piece of work. 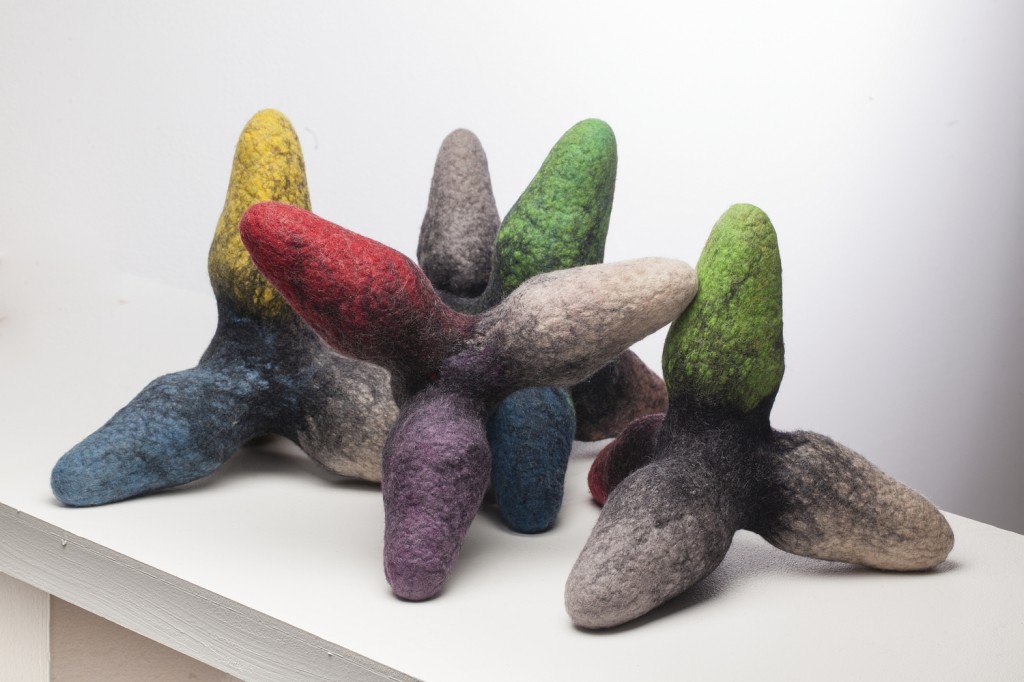