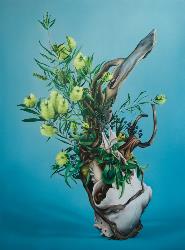 I have had the pleasure of attending a couple of Gina’s exhibitions now. Her delicate application of colour and eloquent placement of her subject matter; mostly consisiting of bones, plants and other native elements of the Australian bush are captivating.
You can visit her site here:

Her new show on at Catherine Asquith Gallery begins this weekend.

This new body of work by Melbourne-based artist, Gina Kalabishis, loosely referencing the St Valentine’s Day narrative as immortalized in Joan Lindsey’s “Picnic at Hanging Rock”, re-examines the Australian landscape, from a very specific female perspective: rather than compositions of grand epic vistas, these oil on linen paintings consider its minutiae.

Utilising the Ikebana arrangements of Norman Sparnon (1913-1995), as the basis for her compositions, Gina presents on one level, unorthodox combinations of Australian flora and animal skeletal parts; on another level, these elements are exactly what would be discovered on a bush trail through the landscape.

Visually stunning, these superbly articulated works, variously titled “Irma”, “Miranda” for example, as in the characters’ names from the novel, present an unique and delicate interpretation of the Australian landscape.

Gina Kalabishis lives and works in Melbourne. She holds a Post-Graduate Diploma of Visual Arts, Bachelor of Fine Art (Painting), both from the Victorian College of the Arts, Melbourne University and an Advanced Diploma of Arts (Electronic Design and Interactive Multimedia) from Victoria University.

She has featured in solo and group exhibitions in Australia, Spain and America and has been selected for number of significant national art prizes, specifically, Winner, The Hellenic Museum and Bank of Cyprus Art Award 2010; Finalist, in the Rick Amor Drawing Prize 2012, a Finalist in the ANL Maritime Art Prize and Exhibition, Mission to Seafarers (2011); a Finalist in the CPM National Print Awards, Tweed River Art Gallery (2011), the Winner in the Emanuel Hirsh Award,. Victoria College, Prahran (1994), and Winner, Essendon Artist Award, Essendon Festival Art exhibition (1993).

In 2012 Gina undertook an artist residency at The Mission to Seafarers, Melbourne, and had been a recipient of a number of commissions and grants.

Previously, Gina established Level 17 Artspace at Victoria University in 2008 and was the Gallery Director until 2011. More recently, Gina has been invited to be part of a group exhibition at the Australian Consulate-General in New York. This exhibition will be showcasing Australian women artists and will coincide with International Women’s Day in March 2014.