Josh Robbins is direct and straight to the point. You can see where his many years working in advertising have given him the confidence and clarity in his approach. There isn’t a lot of vagueness here. He knows exactly what he is doing in terms of his style, what his work portrays and why he is doing it. That fact that he can sell his ideas effectively has landed him a spot in Flinders Lane Gallery and a recent acquisition of his large -scale work, ‘Roost’, by a prestigious Law firm in Melbourne. In contrast to this self awareness, Josh has a sweet naivety about the art world, endowing him with the gift of following his own path and not being drawn into anything beyond that feels real and authentic to his innate artistic direction. 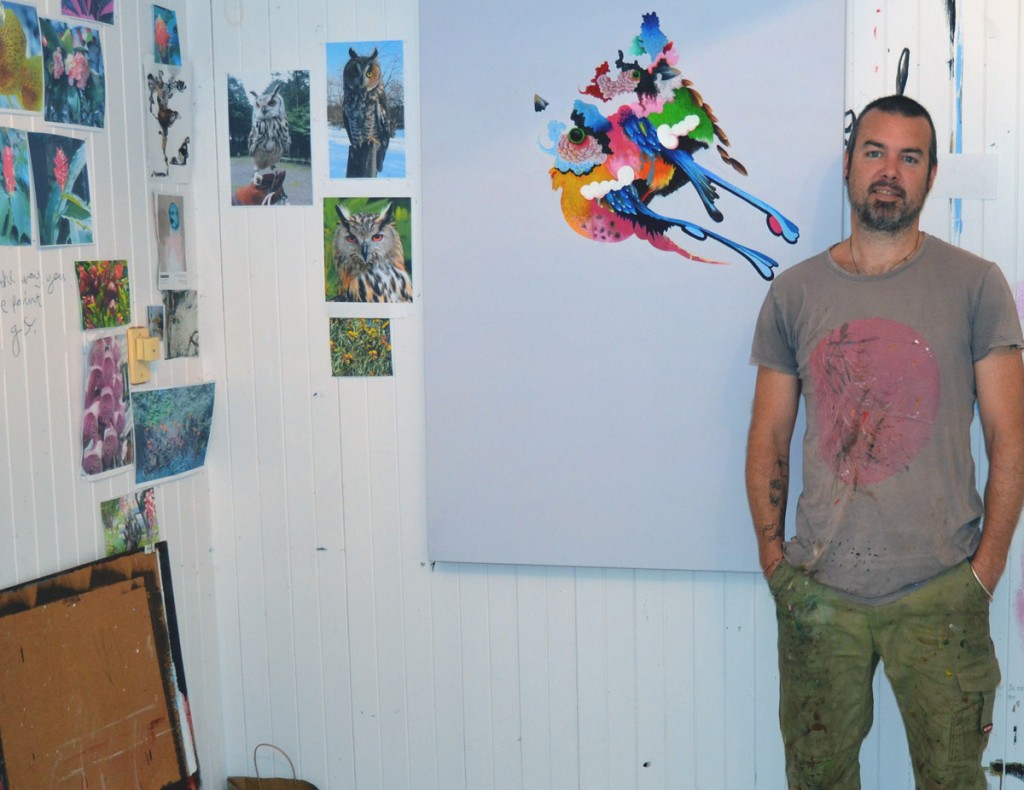 Josh in his studio

Tell me about this acquisition!

The acquisition was for my next show, ‘Roost’, so it was not originally intended as an acquisition. I just wanted to do something big. And take a year to paint it. I had a plan to sell the eight panels individually, but was told by another artist to keep them all together. As timing would have it, Claire at the Gallery found a buyer. He had purchased a piece of mine previously and had a space 10 meters long to fit all the panels. It’s great that its on display and I can go and have a look at it every now and again.

Where is the starting point for you in terms of your painting practice?

I worked in advertising for nearly 20 years. I took six months off in 2007 and put on my first show. I put that on myself and it all went pretty well and I got further inspired. I then I went back to work again, but just got jack of working in advertising. I always had a really vague plan of wanting to paint. At that point, I was about to be a father for the third time and thought it was a really good time to jump ship and see if I could paint (Well, that and the fact that I got fired!). I got into ‘Exploration 12’, that went well and then Claire offered me a spot in the gallery (Flinders Lane). 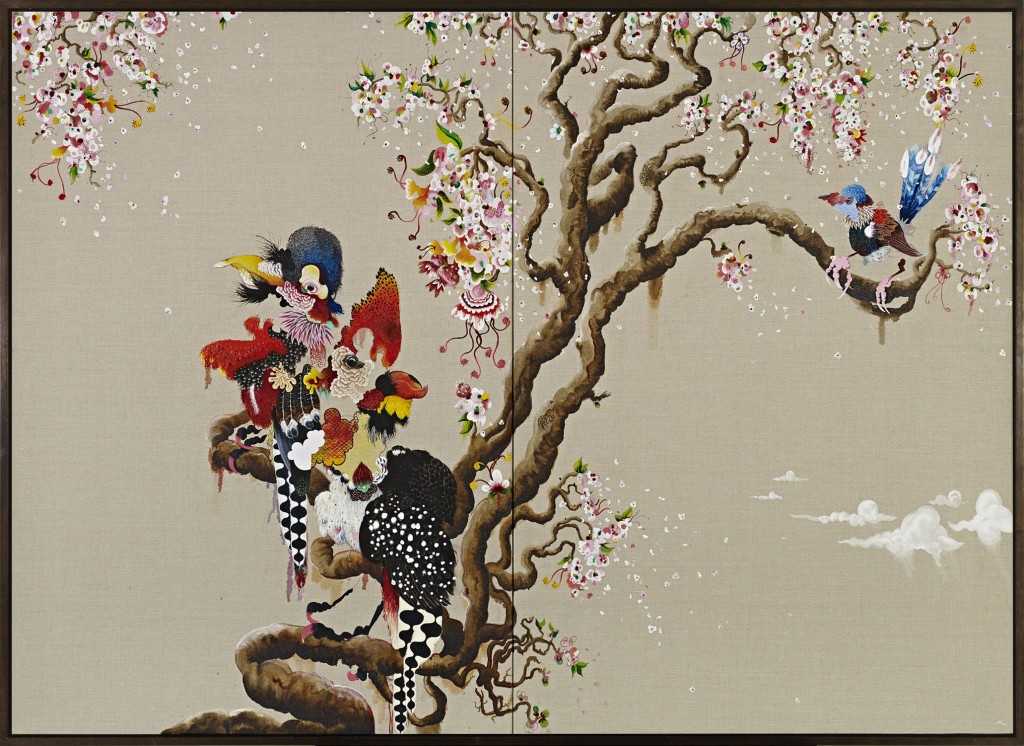 So, you were sort of thrust straight into it, so to speak?

I’ve got no real reference point for any other galleries or even gallery life and I know very little about other galleries. I think a fair bit of naivety can take you a fair way and keep you honest. But on the flip side, I think you sort of need to know what’s going on and how things work and that’s sort of where I am now! 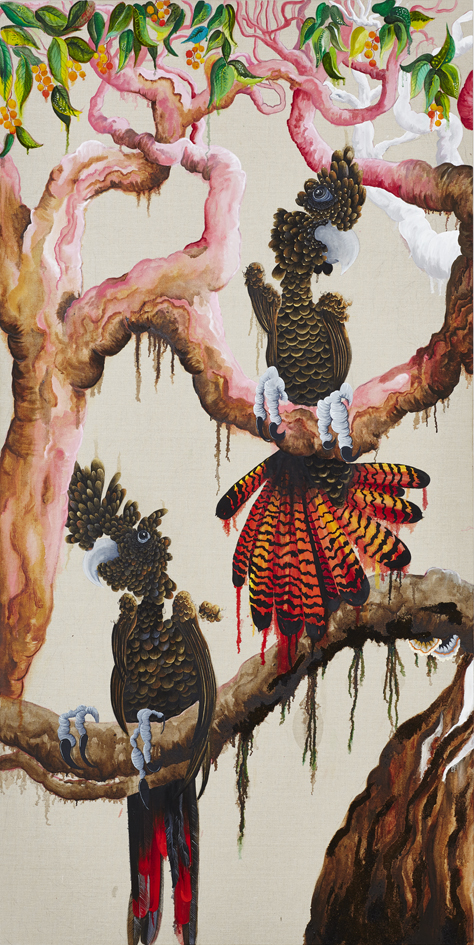 Josh explains that it was the need for more control over what he was doing as a key driver for working full time as an artist:

I did art school and went in a graphic arts direction with a focus on advertising. I’ve always, tinkered and painted and played around with type. And with advertising, I always had a vague notion that I wouldn’t do it forever. Making ads is fun. Making things are fun. But everything In Australia takes a long time. I’d work on a project for 12 months and maybe nothing would happen. I worked in New Zealand for four years and that was great! I find in Australia that we have a bit more of a corporate mentality where ideas constantly get watered down and changed. I wanted more control over what I was doing and not having someone ask me to change things. So now, when I’m on a whim and I want to do something, I can do it. And that’s great. However, the downside is that if something goes wrong I’ve got no one else to blame but myself. I can’t say it’s the client’s fault or the director’s fault!

Originally I wasn’t massively into birds. I was painting a lot of trees, and particularly Japanese blossoms and often using plywood as a base. I decided soon after that trees should have something in them. And so I started messing around on paper and experimenting with drawing different types of birds. I’ve always liked the blind drawing technique and got started on larger compositions and the birds looked pretty cool. Now, I’m developing more of an appreciation for birds. My parents live down at Phillip Island where there are European gold finches and Blue fairy wrens. It’s very exciting to see these birds flitting about in nature. 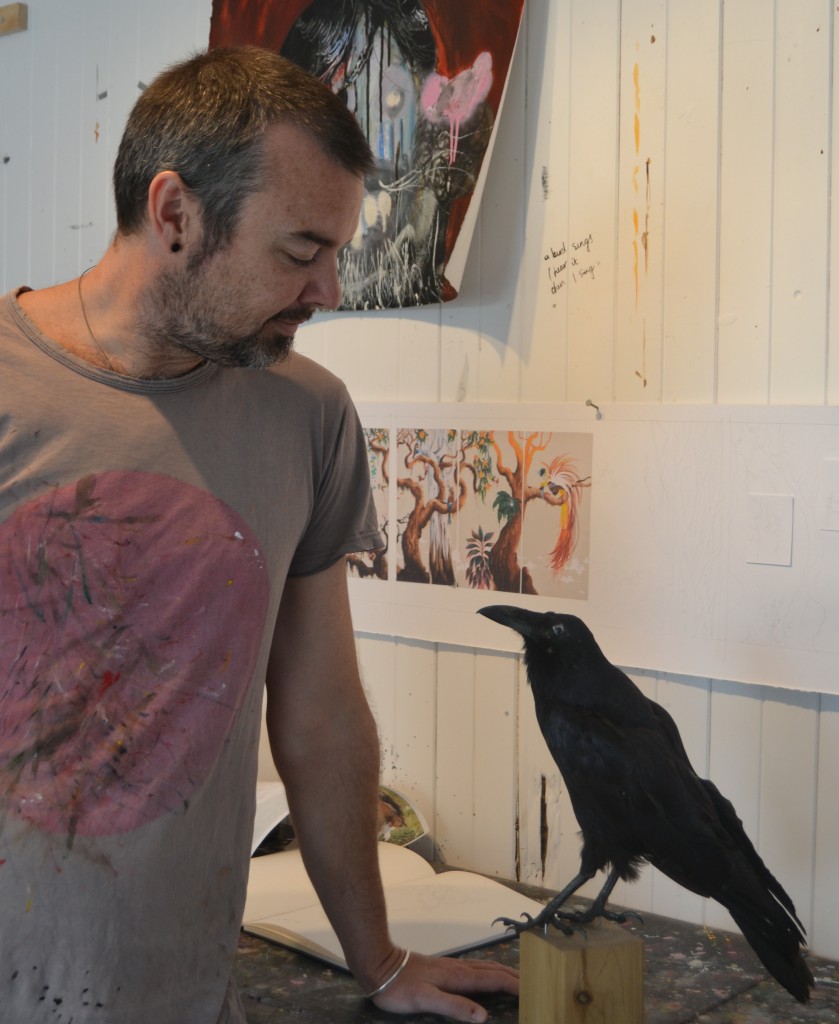 Josh is also very into Taxidermy. In the studio a raven sits on the top shelf lording over the happenings in the studio.

I have had a fascination with crows and ravens for quite a long time. Then my wife got me one! She also booked me into a one day course which was fun, I taxidermed a mouse, his name is Todd but it’s quite an expensive pastime. I would love a peacock! Apparently they come from New Zealand and are seen as a pest over there! 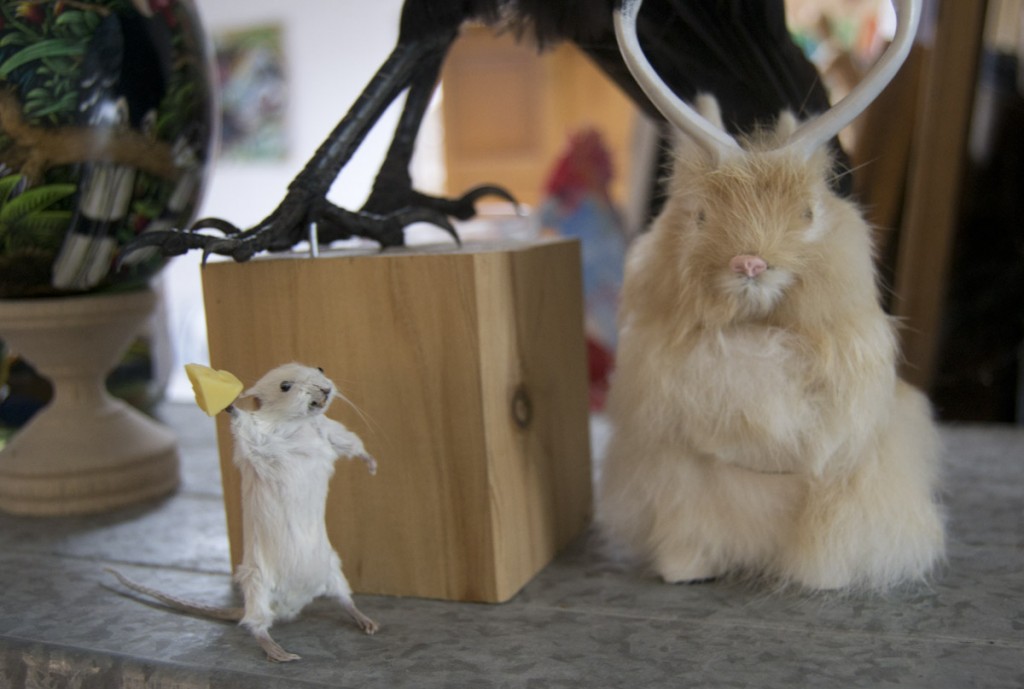 How would you describe your style, or what you’re trying to achieve with your work?

Stylistically, I am more about the aesthetic. There are no ideas in my painting. No political commentary or symbolism drawn from Historical artists. I like the power of how things look. I love when a picture stops you. It could be the technique or the way the paint falls or everything-the composition or what it is. I think having the art director background has had an influence; I like to make things look a certain way. I just want to create beautiful pictures that are quite intriguing and intricate. That is the basis of what I do. And the blind drawing again is trying to create a new aesthetic. The blind drawing helps with distortions and there is a fair bit of freedom in that because you’re not worried about whether it looks right. The only worry I have is that maybe it looks too right! 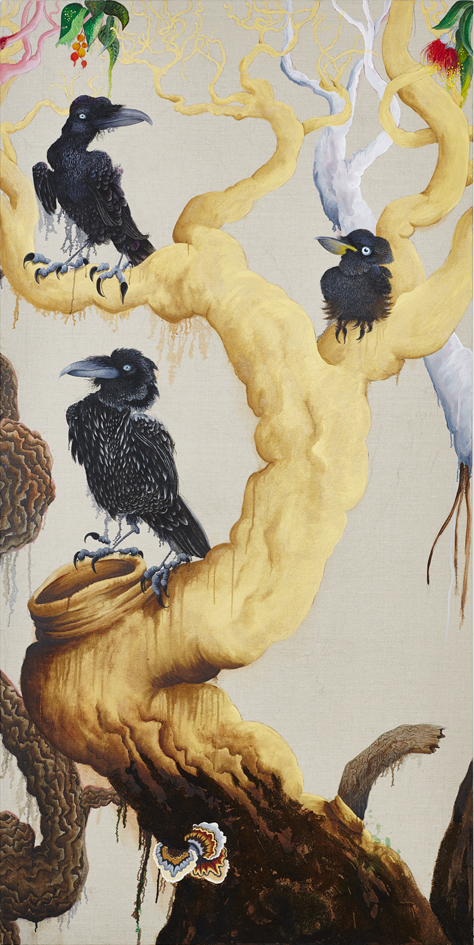 Josh creates work on large-scale canvases using oils, but has also created a multitude of works on paper using gouache or ink. In the early days of trialing, he used floor stain and enamel paint, whatever was lying around. The underlying message that Josh is intent on saying is that his work speaks for itself.

Some people have asked is it just purely decorative? But I think there is something quite powerful in the notion that ‘it is what it is’. There is nothing hidden, nothing to decipher. This is who I am and this is it. The meaning of the artwork is the artwork itself. I think there’s simplicity, beauty, bravery and depth in exposing all that you are, all of the time. Now I have a different eye than when I was a younger. I want to refine my technique and not refine it. It was more raw years ago and I like that. There is a balancing act. I don’t want to ever be too slick. 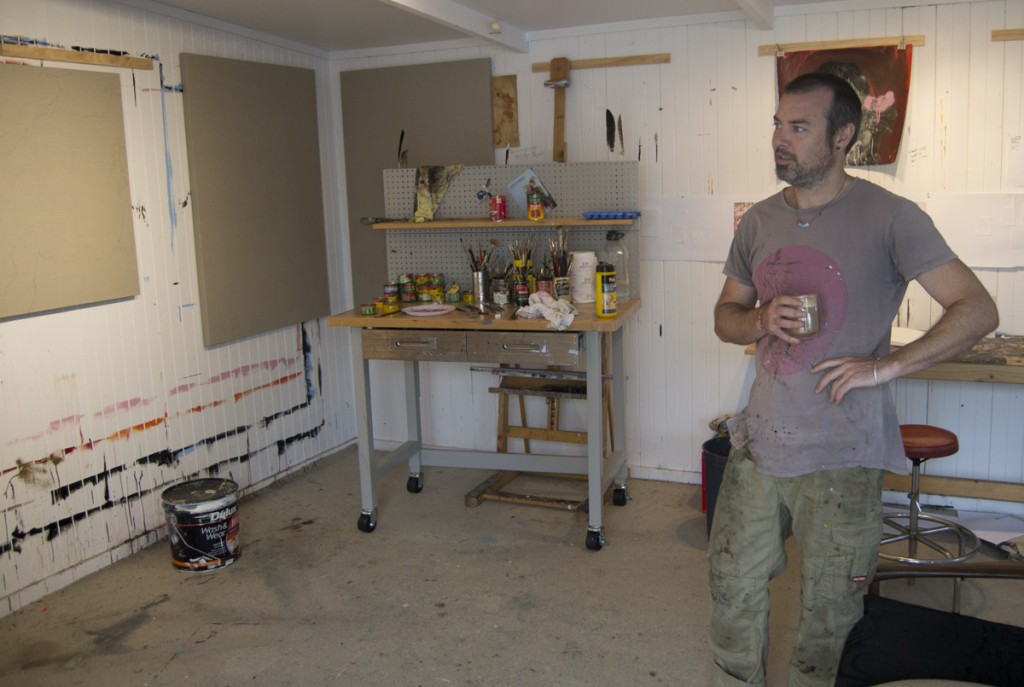 “Sometimes 80 percent of painting is not painting. And I find that since doing this full time, the more you do the more you get inspired.” 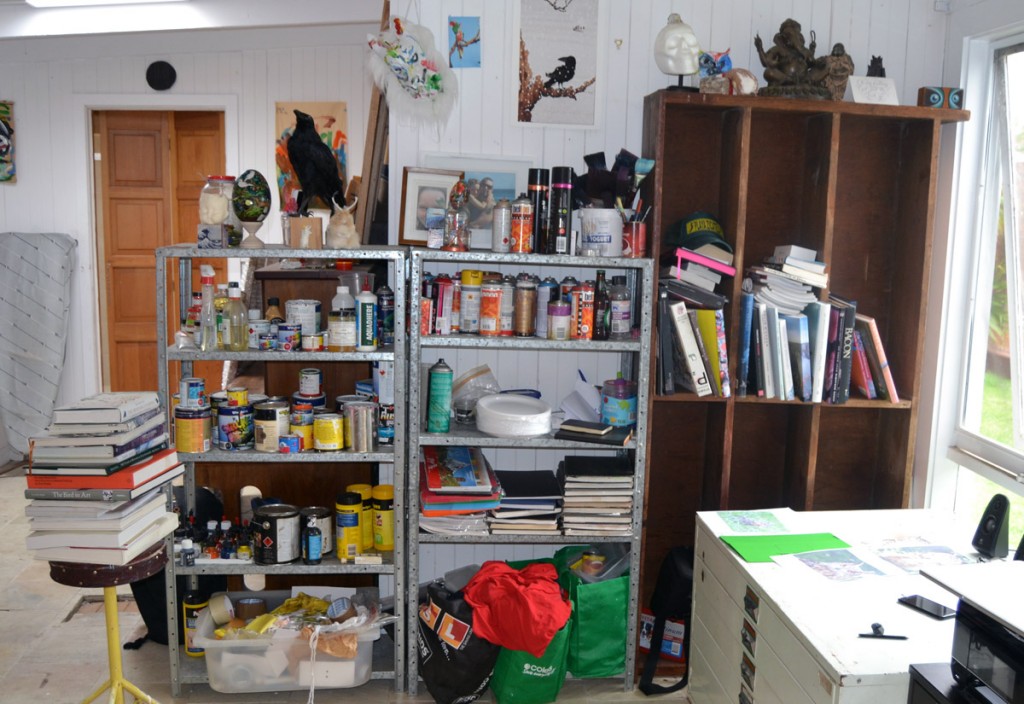 Bits and pieces in the studio 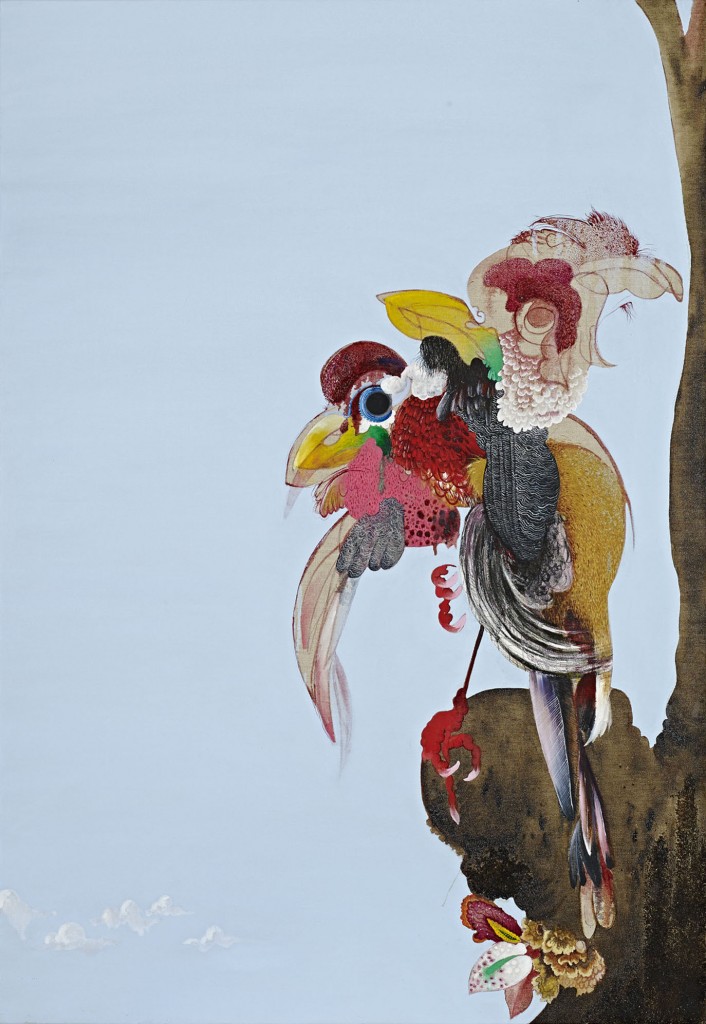 Josh Robbins, One to three Trogons

Josh talks more intently about his need to be clear and direct with his work:

One of the things I’m having a struggling internal dialogue with at the moment is conceptual or installation art. I’m not poo-pooing the artists endeavors I think getting out there and making stuff is great, but, If you need an A4 sheet of paper to describe what’s going on, I wonder if it’s missing the mark a little bit? And, I’m not sure the answer is ‘it doesn’t matter, it’s what the audience makes of it’. What’s the intent of the artist? What is their expectation of the audience? And why does it need such a massive explanation? These questions are important to me.

I remember hearing an author talk about trying to keep his writing as a ‘continuous unbroken dream’. If you keep getting too fancy with your writing or wording, you disrupt the dream. Similarly with art, if there are too many external reference points or cryptic symbols you disrupt the dream. I guess I feel that a painting or art can’t do anything unless it does it by itself. It shouldn’t rely on an external explanation of itself or what it is or what it means (an A4 sheet of paper blu-tacted to the wall), to be understood by the viewer. 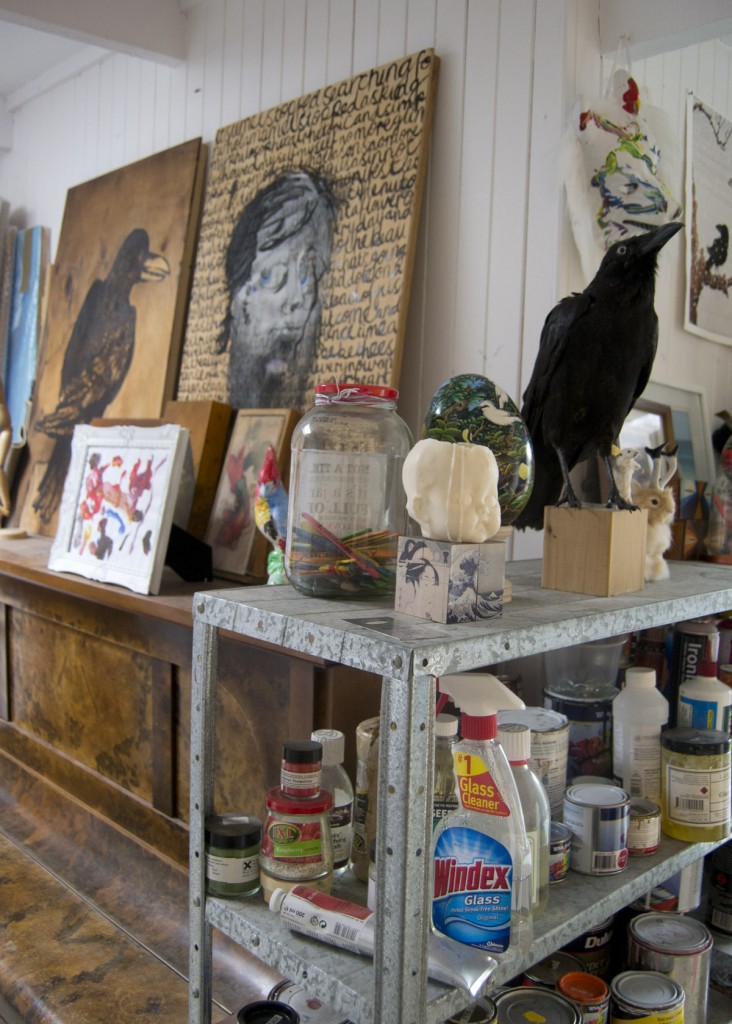 Explaining that the botanical look in his works was not his intention, he has also been influenced by Japanese art for the graphic nature of it and its surface beauty. As far as contemporary painters go, like many artists he draws on a few for inspiration in either their style or their personal attitude to their work.

I think that some of the elements used by Brett Whitely come through as a strong influence in my paintings. He’s my long time painting crush. I also value the ideas of Francis Bacon and the way he used paint, painting was a very visceral thing for him. I am also in awe of Joshua Yeldham’s work and the attention to detail in his famous Owl paintings. Rhys Lee, Amber Wallis Fiona Rae and Kateeric are some of the others whose work I admire. I also appreciate the amount of detail in the classic realist painters as Constable and Von Geurard; I’m amazed at their output of work, its just crazy!

Josh Robbins’ exhibition is on at Flinders Lane Gallery in May from the 5th-23rd. Details here