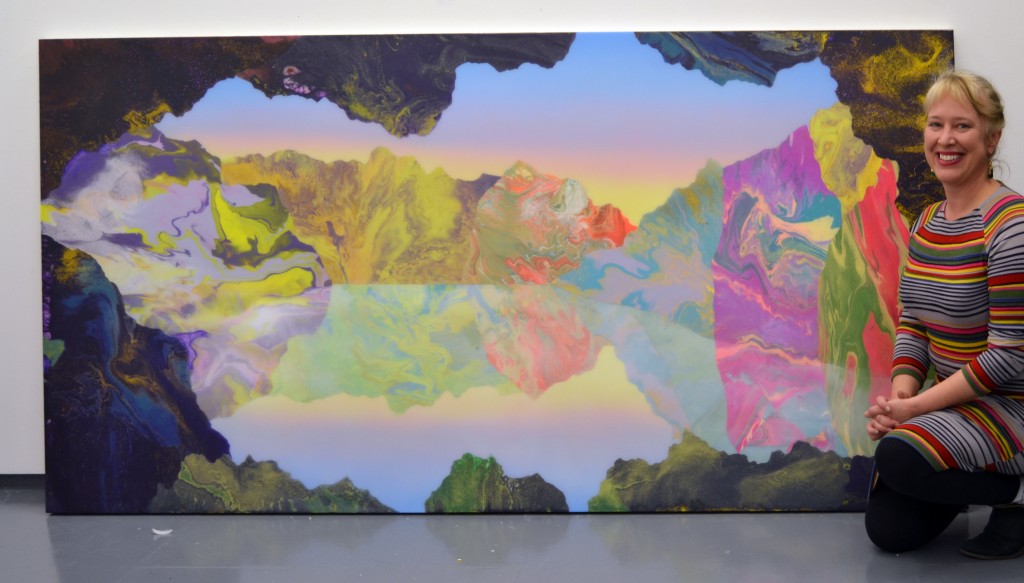 STARDUST IN OUR VEINS

Artists are active explorers of their own realities- teasing out visions from their own subconscious, predicting the future or commenting on the past. They are also interpreters and documenters, presenting their thoughts in a medium best suited to deliver the message. Science Fiction has long been an area of strong interest of exploration with artists. When much of invention and imagination has become reality, particularly in the areas of space exploration and other technological innovations, contemporary art in all its various forms have been right there with it. Art critic and Lecturer Andrew Frost maintains that as a collaborative genre, contemporary art and science fiction has a, “critical attitude to its place in society and a utopian ambition to effect the future itself.”[1] 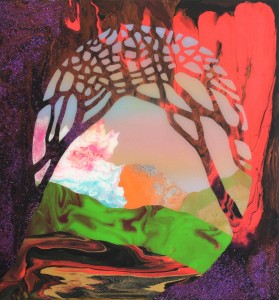 Kate Shaw has long been concerned with the Australian landscape, depicting the fragility and beauty of the top end of her native country. She has a strong awareness of the land and how humans connect to it spiritually, while in the same breath can disconnect through the consequences of degradation. The artist is all too aware of the effects of climate change and is horrified by the ongoing onslaught on the earth, through mining, soil erosion and deforestation. Other geological expeditions have taken her to various locations such as the jungles of Costa Rica and surreal landscape terrain across the United States. She has explored the vast Arctic outpost of Iceland with its, geological marvels of volcanoes and glaciers which provided her with a myriad of imagery for her to sculpt and re interpret into her brightly coloured, swirling and psychedelic formations. 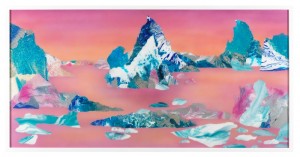 As we head into an unknown environment, Shaw maintains a critical eye on the future. Her fascination with the human need to explore and conquer other planets plays on her mind. The work continually evolves as news of these new human explorations come to light. In the work ‘Spaceship Earth’ a ghostly outline of a planet presents itself behind the mountainous terrain, which hints at the subject matter for this show. Her own shift from earthly terrain to the major surface areas of Mars reflects her inquisitiveness and ability to seek out the unknown.

It has been speculated for some time that Earth and Mars were once very similar planets as they formed in our galaxy. About 3 billion years ago, Mars underwent what has been described as the ‘great desiccation event’. Whereas Earth, underwent a ‘great oxygenation event’ which resulted in our planet developing a breathable atmosphere. This event raises the question: Could Mars be another earth? [2] 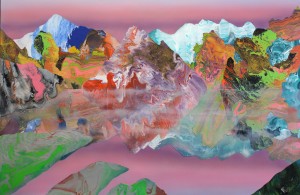 “This painting series came about upon hearing about the proposed reality TV show ‘Mars One’ [3] with the first manned mission set to leave in 2024. Every two years, a team will arrive until there is a population large enough to have a structure to complete an eco-system, something like the movie ‘Logan’s Run’, or the ill-fated Biosphere 2 in the Arizona desert. I am fascinated with the idea of structures within structures, and what kind of eco-system might arise in these conditions. Also, if the Mars One population introduce terraforming,[4] a breathable atmosphere may be possible, in as little as 10,000 human years, beginning a process that could sustain the evolution of life.” 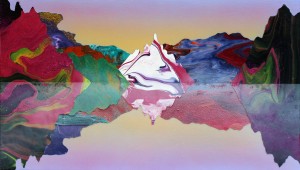 Shaw’s approach to art making is rather like a scientific experiment in itself. Her paint pouring technique; getting the formula just right to produce her illusionary landscapes is a wondrous blend of science and magic. The elements are there; the illusion of depth created by a clever blend of contrasting and harmonious colours, invite you to explore a cave, a glacier or to trace your eye over their reflection. Her studio is a lab of sorts, with various stations and so many elements are at play. Her work is very much about her ideas of paint and painting; as it is her social commentary on the human desire to explore, conquer and ultimately create new worlds. 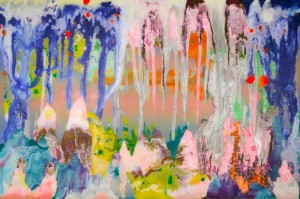 “The paintings deal with the tensions and dichotomies in the depiction of the natural world and our relationship to it. I am concurrently exploring the sublime in nature whilst imbuing a sense of toxicity and artificiality in this depiction. The intention is to reflect upon the contradiction between our inherent connection to the natural world and continual distancing from it.”

There has been a fundamental shift in the nature of relations between humans and the earth. For the past 10,000 years we have been living in the ‘Holocene’. Scientists have coined the term ‘Anthropocene’, to describe a ‘new geological epoch’ that we have been apart of since the 1950’s. Human induced climate change as a result of our need to dominate the natural environment has altered the planet and is now seen by many Scientists to be irreversible. The hydrosphere (water), the lithosphere (earth’s crust) and the biosphere (global ecological system) have all been affected by global warming. Owen Gaffney from the International Geosphere Biosphere Programme concludes: “The concept of the Anthropocene gives people a new perspective of our place in the world. We can no longer consider ourselves at the mercy of great natural forces. We have an active role in global change, in many cases we are driving it.” 5

Over 50 years ago, Swedish poet Harry Martinson, dealt with these very same issues in the poem ‘Aniara’. It tells of the fate of humans as they set sail for the planetary skies due to a nuclear catastrophe on planet earth: 6

I had meant to make them an Edenic place,

but since we left the one we had destroyed

our only home became the night of space

where no god heard us in the endless void.

Shaw is invested in the idea, that as much as we are the problem, we are also the solution. Despite all the global turmoil, she remains optimistic that human consciousness has the power to perhaps create a new world and preserve what has been left behind.

Opening Hours
Wednesday to Saturday: 11:00am to 5:30pm
or by appointment