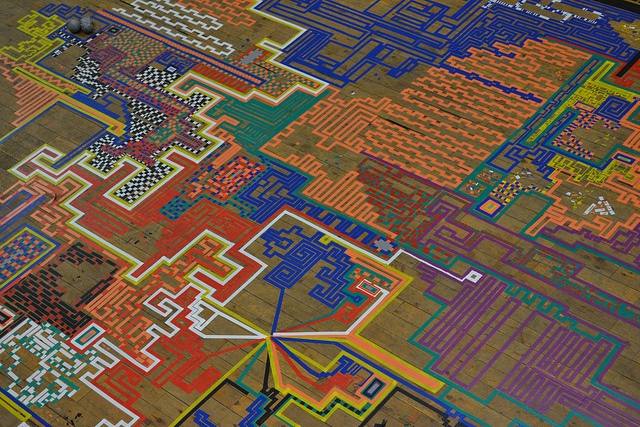 Many intriguing questions and issues arose from last night’s discussion. Each of the three artists being interviewed by Alica Sometimes, have ‘embedded’ themselves and their practice within the scientific world.

So what are the similarities between scientists and artists in the way that they deal with their practice?

Actor James Saunders was relating to a relationship he had with a neuroscientist, discovering that they both had an interest in philosophy and art. He also commented on the research aspect in both fields, there is a sense of a continuum in each. Scientists also have a sense of wonder and creativity, as do artists. He remarked that his play ‘Fugue’ based on a controversial psychologist; Harry Harlow- emerged much richer in ideas from these interactions with his collaborators-neuroscientists from Monash and Melbourne University.

Briony Barr, regularly collaborates with an astrophysicist and microbiologist-to produce large scale drawings (using tape to build the form), that ultimately become an even larger collaborative piece involving up to 30 people. Through the building of patterns involving interactions and a set of instructions; such as ‘draw a line 10 centimeters long…’ and ‘…make the line on a 60 degree angle’, it becomes its own complex system-like an ant colony. She said that these complex systems would ultimately need a mathematician to try to make sense of it, and even then that would be a huge challenge. She said that artists could be like scientists in that they tend to ‘make’ and ‘remake’-in this way they are solving problems and can end up with varying results. 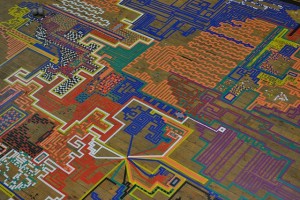 Leah Heiss has used an amazing array of substances and technologies to create often-beautiful works that can be used in the Medical field. Nano technology, magnetic liquids and chemicals are used and manipulated in her practice. She described her field as a ‘trans disciplinary’ one-where there is a need to collaborate. When ‘fusion’ or collaboration occurs with herself and her colleagues (scientist and doctors), things of value are created. As an artist/designer, she believes these ‘things’ can create empathy between people and technology. In relation to her own practice, Leah said that the artist is often asking the difficult questions –such as the ethical questions or the possible impact of what they are creating.

The need to have an outcome in Medical Research was one that the panel agreed on and it seems that through these creative processes, artists can ask the challenging questions and encourage more trials in research. Also the language that both groups use can perhaps merge and be developed further to expand on the collaborative process. James Saunders remarked that a neurophysicist had explained something scientific to him as a metaphor in order for him to better understand. I believe it to be a very exciting prospect, that these collaborations could soon become a normal part in the area of innovation in all areas of the scientific world.