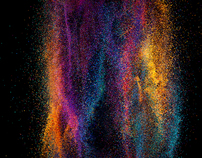 I plan on devoting part of this space to the subjects that really interest me and seem bottomless in terms of exploration. Art and science, for example are two areas of study that continually open up new ideas in my way of thinking. The idea of art and science as a collaborative concept are not new. The first artist that comes to mind is Leonardo Da Vinci. Not only was he an artist, he was a botanist, mathematician, writer, musician and the list goes on. Fast forward a few centuries and the art movement of Cubism for example, utilised the theories of mathematics, to illustrate the ‘fourth dimension’; by looking at space and measurement from a range of viewpoints, and not just what one ‘sees’, from one point of view. And mathematics is fundamental to the sciences and part of nature. Artists, Philosophers and Scientists have been trying to make sense of their world and the ‘unseen’ or hidden universe for thousands of years. Music is a large part of the equation here too, but that is a focus for another time…

This talk is one part of a forum containing the views of prominent artists and Professors: Arthur l. Miller, Oron Catts, Stelarc and Nina Sellars , who boldly examine the prospect of the science-art combination as a revolutionary new ‘third culture’. Also looking at the changing nature of aesthetics with the rise of these new ideas.

Good old TED videos, can’t beat em’. The swiss photographer, Fabian Oefner has been able to capture images of things usually heard or felt and not visualised. For example, using a range of coloured crystals, he has been able to give visual meaning to sound waves and by shooting these at 2000 frames per second, has produced a visual masterpiece.