I first viewed Del Kathryn Barton’s work “Come of Things” at the Melbourne Art Fair in 2010. Quite frankly, I was in awe of this work. I didn’t know where to begin, in fact, I could just start looking anywhere into that landscape and be lost in the intricacy of those delicate marks. I remember making several journeys, around and around and kept being drawn back to the powerful imagery, almost shimmering with life and other worldliness. Residing in Sydney, Barton is a leading contemporary artist who offers her audiences a powerful cacophony of imagery, naturally inviting lively debate and discussion. She shares with her viewers her vulnerability, innocence and connectedness to the natural landscape and the unseen world. Her attention to detail and her close relationship and in depth understanding of her mark making proves that she is dedicated and methodical in her process.

A mountain climber and instructor for years, this sure-footed, step-by-step approach clearly applies to her drawings, paintings and sculptural works. I had the opportunity to hear Del talk in depth about her drawings at Heide Gallery in early 2011, where she explained that it could sometimes take her up to 6 months to do a detailed drawing. These drawings are often done in a meditative, repetitive and methodical way, slowly, and over a long period of time. She indicates during this discussion that she had to exhibit her work otherwise, having drawings ‘lying around’ made her feel ‘anxious’.

Barton also reveals to her audience that her mark is ‘honest and vulnerable’. Architectural pens are applied directly on the paper so ‘there is no going back’. She says that she takes risks and is not good at pre-drawing, and as a result, there are a lot of rejects in her studio. And in regards to her mark making and the meaning attached, she explains: “My drawings are made of highly personalised symbology…there is an energetic visual quality in the repetitive pattern”. Standing in front of a large-scale work or even a smaller scale drawing, there is the visual quality of Barton’s repetitious pattern that optically, can be challenging in its own way. But there is also the spiritual or personal journey associated with the symbology within those intricate marks. 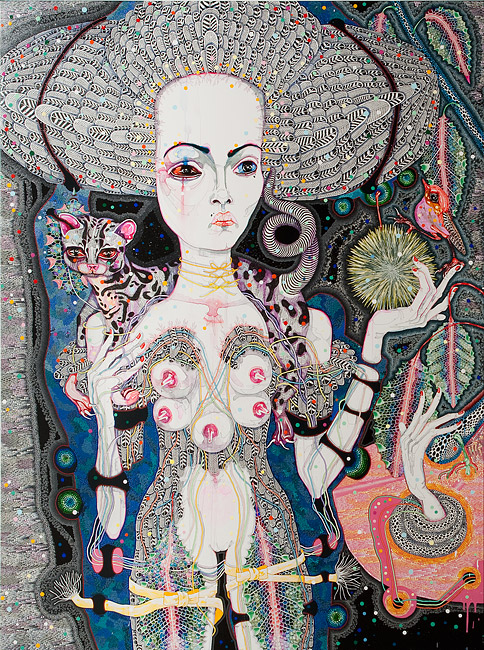 Barton’s illustrative graphic style works, particularly her paintings, explore a myriad of colours, line styles and patterns; adornments are also abounding. She uses a large variety of materials, often mixing synthetic polymer paint, gouache, watercolour, pen, glitter and sequins. Her paintings show an obsession with meticulous mark making; from miniscule dotting, to veins on leaves and strands of hair. Being that the production process for her larger paintings is extremely labour intensive, she now employs an assistant as demand for her work has substantially increased. In many of her paintings, it is evident that there is a clear aversion to white space, and to overcome this, she often creates an environment where each subject or creature is intertwined somehow together and in with their surroundings. Often this intertwining is used to convey the attachment of parent and child, either human or non-human in form. An array of curly and intertwining, vein like tendrils connect mother to offspring. Women and girls gaze into the landscape, sometimes half- human or alien like with multiple breasts and open hands. Birds, snakes and lady beetles are often scrambling through this intermeshing world, nurturing and being nurtured; all part of the ‘giving and receiving’ that Barton frequently refers to in her interviews. Artists such as Louise Bourgeouis and John Currin, who have both drawn on themes of sexuality and isolation in their work, are strong influences. Botanical art and fabric design are also utilised for inspiring her highly patterned works (Art and Australia). 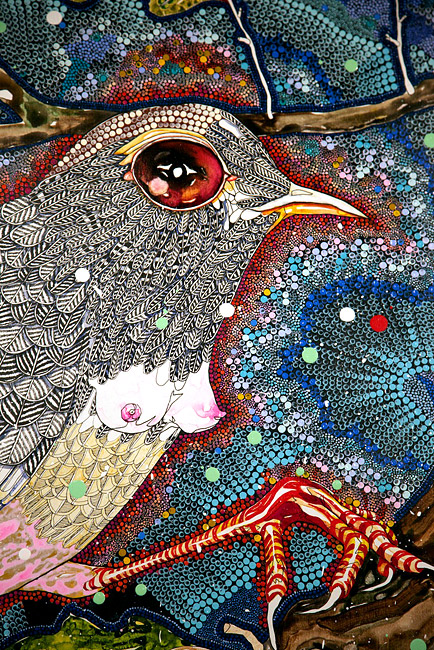 Del Kathryn Barton
from her nest in the holm-oak tree the nightingale heard him, 2011
acrylic, gouache, watercolour and ink on polyester canvas
173 × 153cm

Other features of her works are images of women, girls and boys with exaggerated features such as large, almost manga style eyes, elongated fingers and limbs. As for those big, liquid shiny eyes, Del explains in an interview with Rosalie Higson, it was about her love affair with her first child, Kell: “I came to motherhood with no experience of children or babies and it just blew me away how clear their eyes are …his eyes were wide open and I think that was one of the most significant experiences of my whole life”(The Australian, 2008). A fine example of these eyes of her children is evident in her 2008-winning portrait for the Archibald Prize. 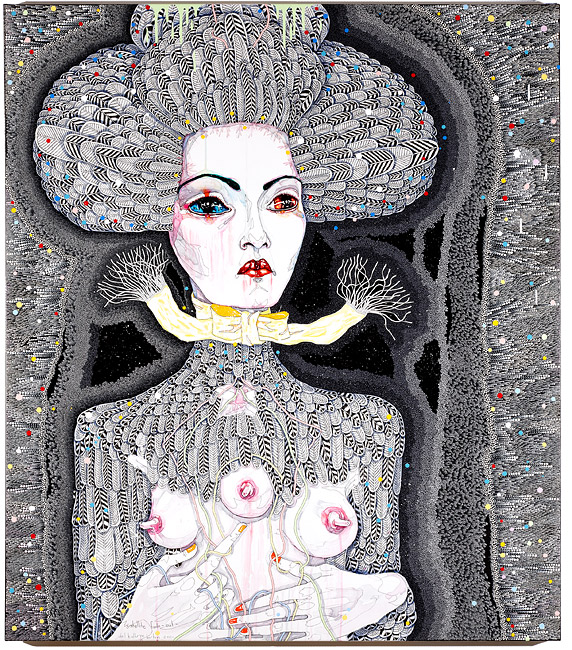 Barton’s landscapes are reflective of her varied experiences, influences and affinity with nature and ‘the unseen’. Through her highly detailed works, she has been able to deal with strong emotions that have prevailed since childhood; and has openly worked through these feelings with her audience. She has achieved this by pursuing her feelings surrounding sexuality and the human figure, and its relationship with the natural world.

Del Kathryn Barton is represented by: