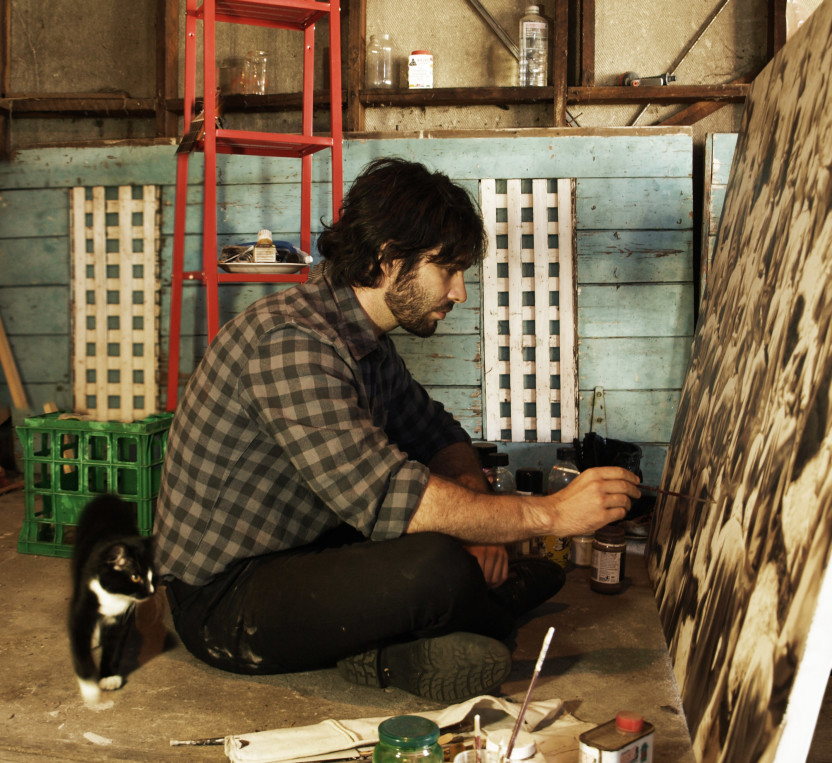 I am very excited to bring to you the very first edition of the ‘Art Diary’ series; where The Art and The Curious invites artists to submit their own diary entries! The very first entry comes from Melbourne based artist Ben Howe as told in his own words and chosen images.

Ben’s  paintings are on show at the Waterfront Gallery ARI – extended until the end of February: See more information here 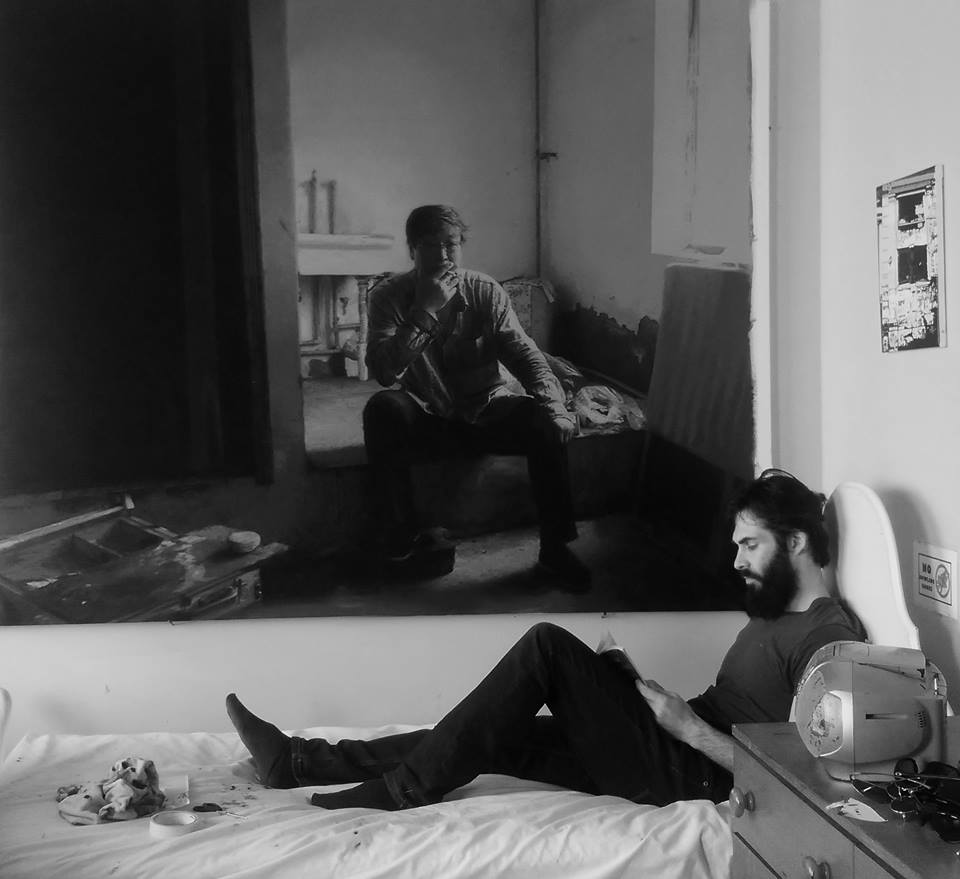 I was a creative and introverted child with dyslexia, and experienced bullying at school and a troubled home life.

I travelled to Europe for the first time when I was 20. With little skills other than my art, I went through periods of homelessness and was able to subsist through participating in pharmaceutical trials – a drug testing ‘Guinea Pig’.  That formative year culminated in a 4 day kidnapping in Morocco. I was able to return to Australia some months later and began painting with a particular view of the world. I have lived abroad and travelled periodically ever since, trying to see how people work, and understand how I fit into it all. Over the course of nearly two decades, I have explored memory, isolation and lived experience.

I want my work to function as a platform for broader considerations relating to the physical and subjective self within contemporary society. I have worked a lot within the theme of crowds, be they riots, protests or the observation of daily city traffic. 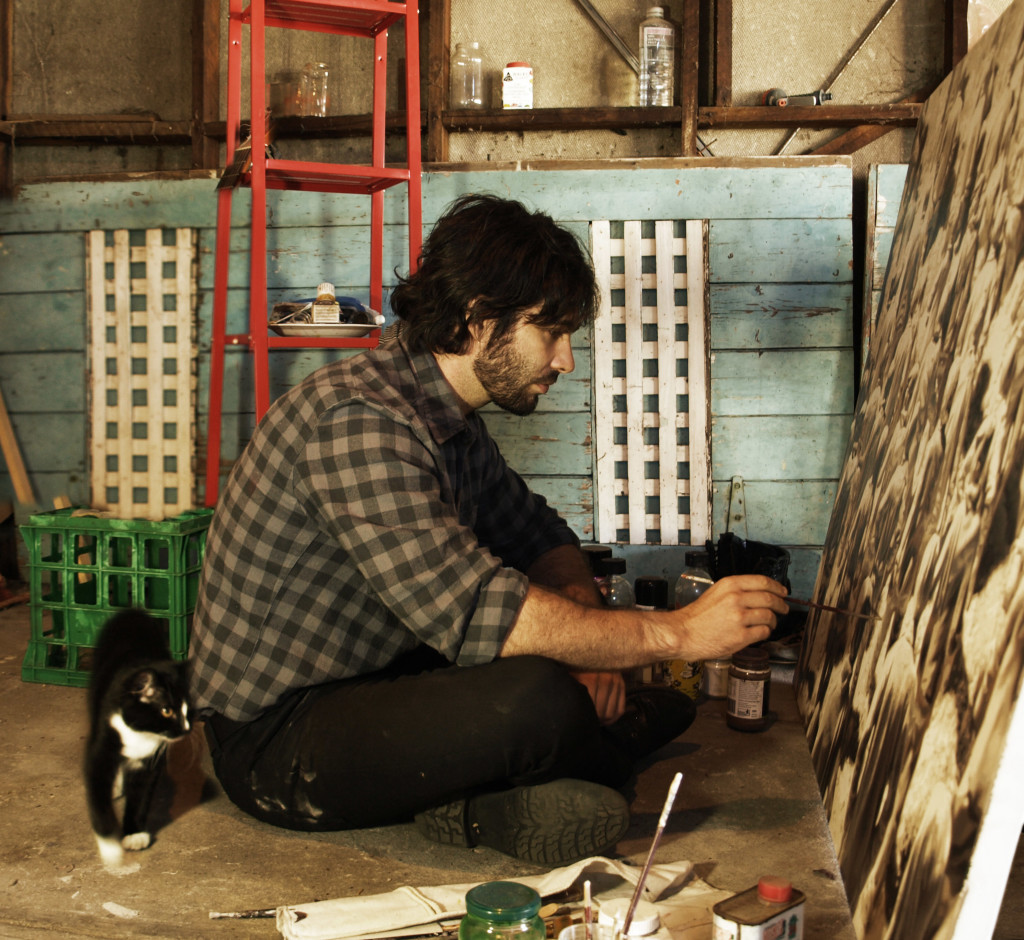 Ben at work in the studio

This painting references five sequential frames of footage. Condensing the information into a single painting, each cumulative layer effected the next, tending further towards dynamic pattern with each stage of the images progress. The faintly discernible textural layers indicate a sense of history trapped within the paint. 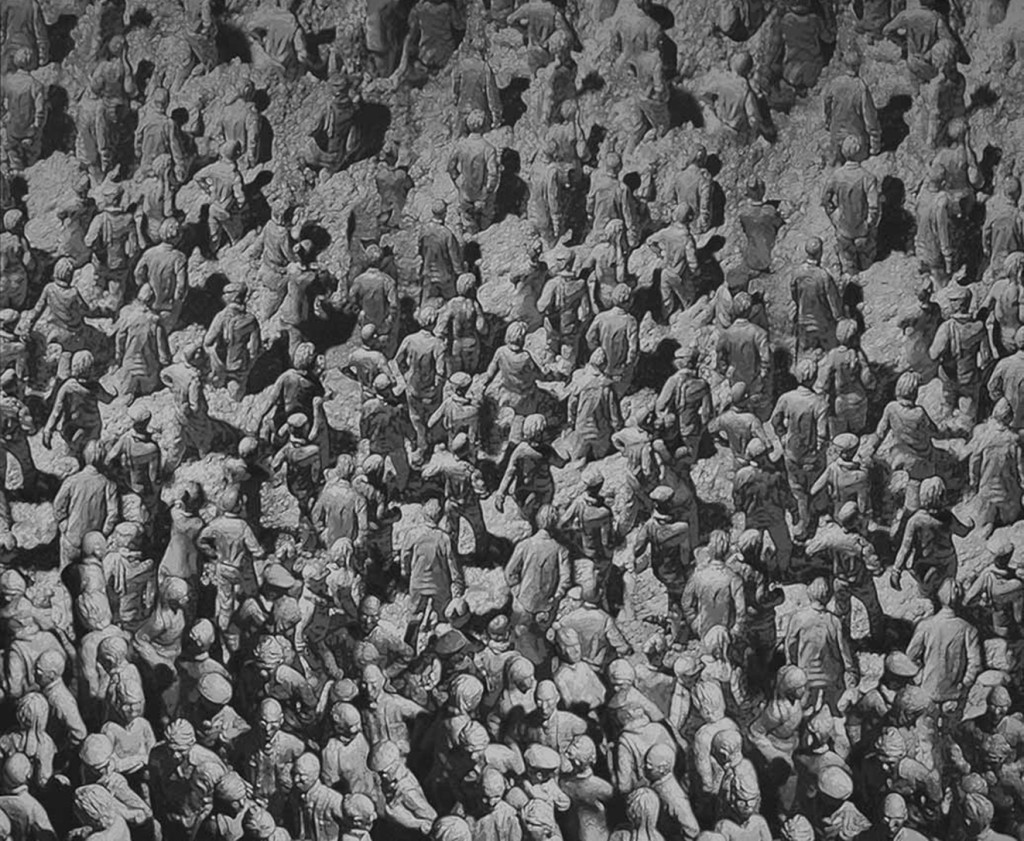 With a later series I opted to completely synthesise a crowd, creating seven archetypes from which approximately 200 figures were cast. Stripped of any intimate character, the figures serve the purpose of icons or avatars: truncated representations of a whole, into which it is easy to project a notion of the self.The dioramas were photographed and rendered in paint, using a technique that appears photographic from a distance, yet becomes more abstracted and painterly with proximity. Repetition, miniaturization, and fluctuations between representation and abstraction were used to activate links between the body, movement and memory.

The latest body of work was created during a residency in China in a geographically remote Village, situated to the north of Beijing.

The paintings are a direct response to the unique situation, which provided the conditions to examine how people move into a space and start to inhabit it. 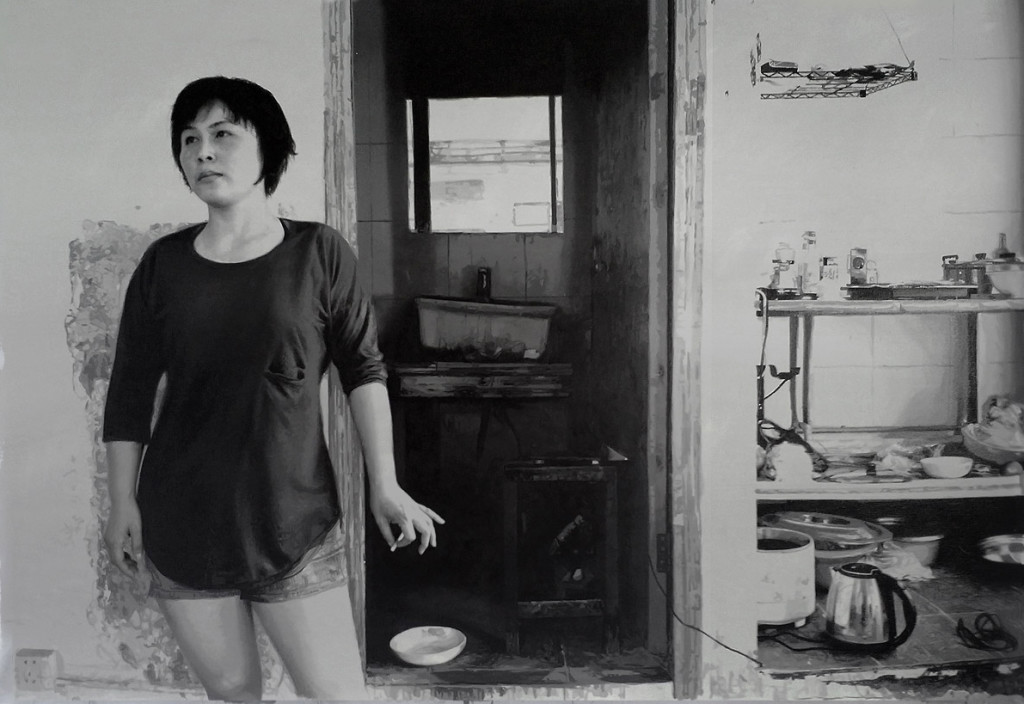 Upon arrival, It became evident that although surrounded by the richness of another culture and in the company of people from many different origins, this would largely be an interior experience.

Each artist was assigned a similarly barren concrete ‘cell.’ Over the ensuing months, we would all grow into our spaces, scavenging furniture, making use of bricks and stones and whatever else we could get our hands on.  My own bed originally consisted of a metal frame complete with a piece of plywood adorned with jutting nails.

After becoming accustomed to an attachment to technology over the last decade, It was curious to experience an almost complete failure: my phone was unusable, the internet only occasionally worked and I smashed my tablet. Communication was largely managed through charades, there was no refrigeration, running water was often turned off for days; Living was reduced to the essentials.

I believe I became a little mad during those months, and it is somehow manifest in the paintings. 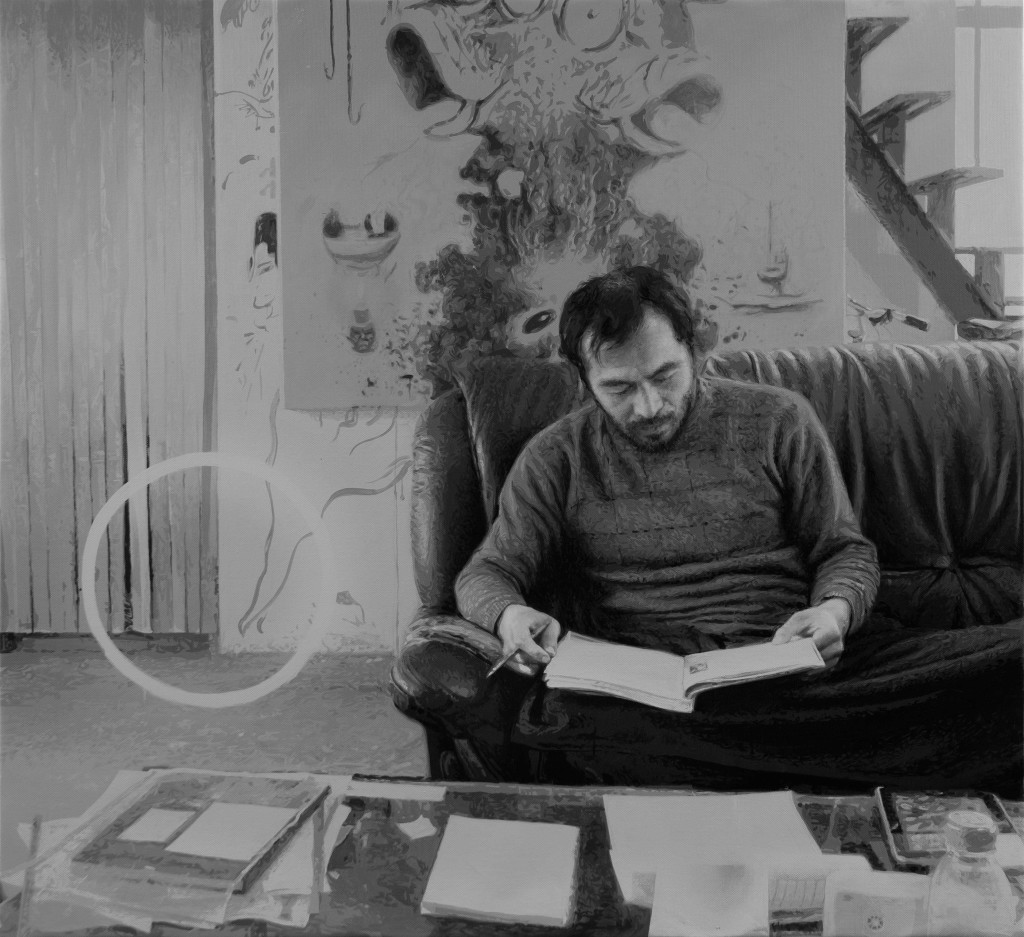 I was obsessed by the incongruities of space and memory- the semi-conscious adaptation experienced by myself and the migrant residents – the peculiar association of subject to physical environment. 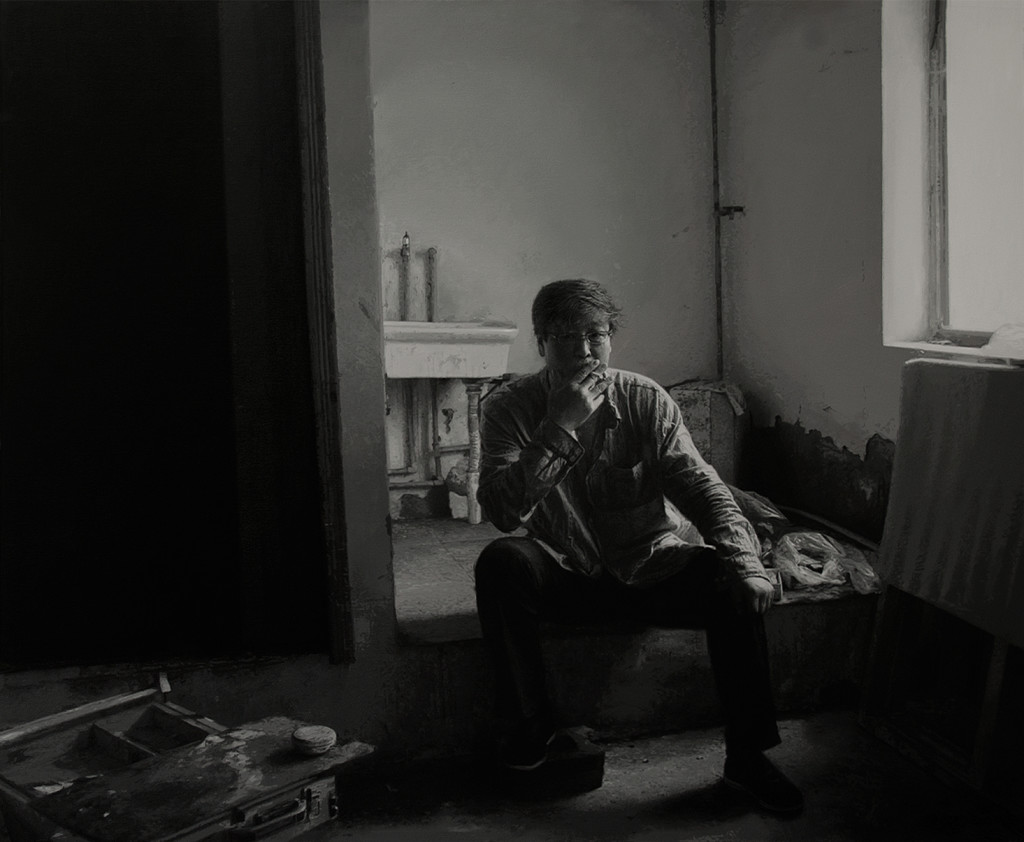 I used expressive brushwork, sharp contrasts and large sections of black. Spatial distortions illuminate or add information while symbolic elements, informed by the subjects activity, or my own reaction to the space, further disrupt the illusion of sheer figurative representation. A synthesis of both external and internal realities, the paintings reflect themes of dislocation, habitation and the subliminal response of the psyche towards the unknown. 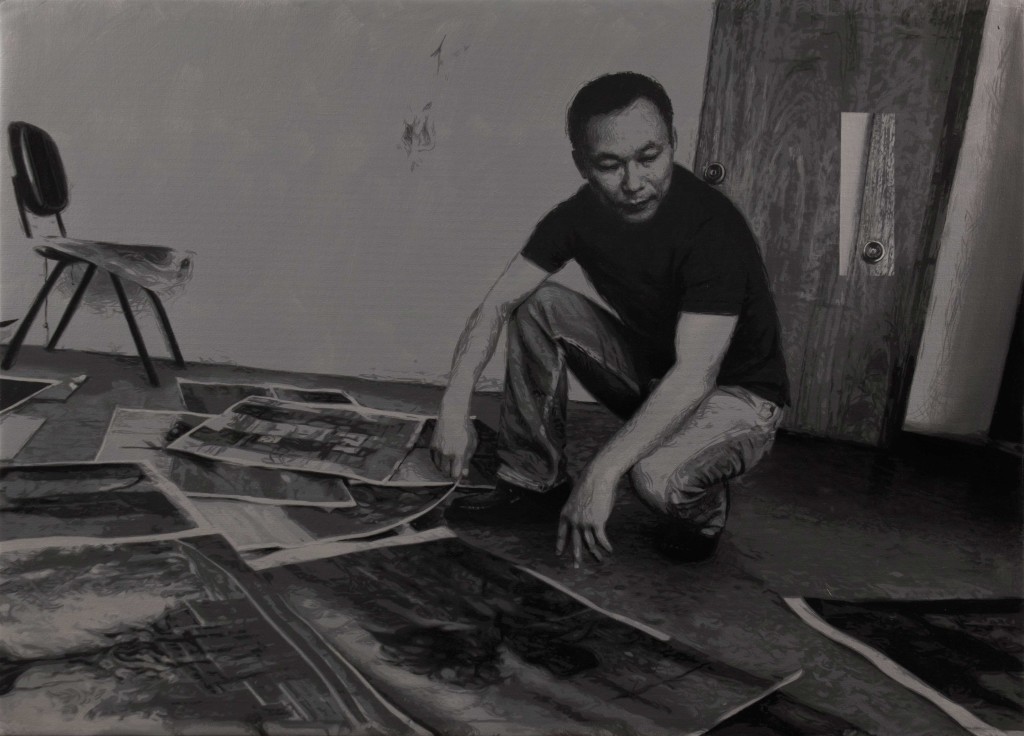 Environmental image is a product of both immediate sensation and the memory of past experience. 150x108cm

During the creation of this series, I lost 10kg of body weight. 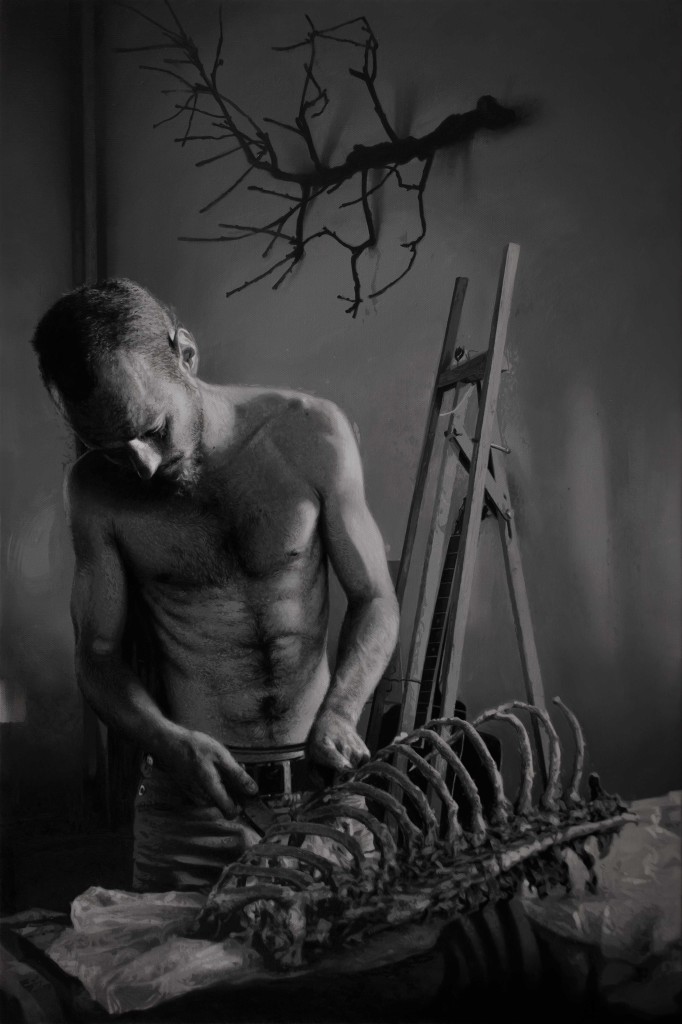