“Gordon Morrison and the Dusty Miller” is Paul Borg’s latest portrait currently showing in the Salon Des Refuses at S.H. Ervin Gallery in Sydney. Each year ‘rejects’ from the Archibald and Wynne prizes are carefully selected based on a set of considerations including: quality, humour, diversity and experimentation. A while back, I spoke to Paul about his processes of making a portrait.

As promised, I have finally returned with more- especially as Paul’s paintings are consistently rich in narrative and symbolism. Sometimes these metaphorical elements may be obvious to the viewer, but quite often they need to be unpacked and the only way to really know what these elements are- is to speak to the artists themselves. 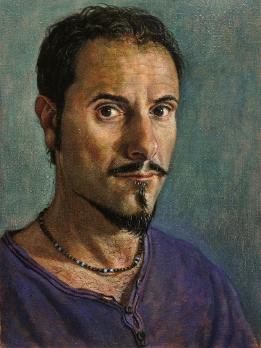 Paul Borg, ‘Becoming 50’ -Oil on Linen-Image courtesy of the artist

How are you feeling now after being selected for the Salon Des Refuses?

It was a real honour to be approached by Gordon to paint his portrait for the Archibald. I found out that he had known about my work for a while and he remembered the portrait I did of my father that had been selected for the Doug Moran National Portrait Prize. It was on show at the NGV where Gordon was working at the time. He likes the renaissance essence in my paintings and appreciates the time and effort that goes into it.

Paul said that sometimes working out in Melbourne’s west you feel as if you’re “pushing nothing uphill” and not taken seriously. The studio life can often be all consuming and isolating, but this achievement has changed things somewhat:

Well, I feel like that this has been quite a milestone. A lot of the time artists approach people to paint their portrait, but to be asked makes me feel as if I’ve really stepped up and achieved something. It has definitely given me more confidence.

Paul’s entry for the Doug Moran, “Interrupting her moment of concentration”- Eva and the apple, Oil on Linen 2014, Image Courtesy of the Artist

I asked Paul about the steps involved in his portrait making. Many artists work directly from photographs, or do minimal time sitting with their subjects. Others do a lot more sitting and paint from life, using photographs for details and a guide.

I first invited him to my studio and did a pastel drawing in colour of his face, to really get to know his face and all the intricate parts of the structure. During this time, I asked him questions to find out more about his life. I already knew he had a Scottish background, but there was something about his skin that seemed different. I was right. His mother is Polish and was very into art and culture and she had connections with well-known artists in Europe.

Paul told me that this initial process is just as much getting to know about the person and their life, as is the structure of the face or figure.

I took photos of him to think more about the composition. I was thinking about representing the full figure first. Gordon is very tall with big bones and I wanted to get the essence of that in the work. In the portrait, you can see that both his shoulders look like they are squeezing into the space. He is a gentle giant and his hands are really soft and not harsh, so I wanted to capture this. I showed him the different ideas and the one he chose was the same I preferred. I know its not normal practice but I don’t mind if the sitter has a say, especially if they know art. Afterall they have to live with this painting out there about them.

The second stage of the meeting involved Paul visiting the home of Gordon and his wife in Ballarat, to dig deeper into Gordon’s life. He then went back to the studio and prepared the ground for the painting in deep olive tones to get the desired skin colour coming through, resonating with his subject’s Polish heritage. Then a third meeting took place, where Gordon came and sat again. This time, Paul did the painting of his face, working in layers from the under painting through to an almost completely finished image.

I painted the face directly right through, it took about two hours. Gordon was shocked that it had been finished in that time! The hands had initially been laid down quite rough from a photo then completed from life in another sitting.

Paul Borg, Finalist in the Salon des Refuses 2015,” Gordon Morrison and the Dusty Miller”, Oil on Linen, 2105 Image Courtesy of the artist

Already knowing Ballarat quite well, Paul tied in images of sheds and rooftops that remind him of ‘how it used to be’ in his home suburb of St Albans. In the background, there is a view of Ballarat in two parts that he joined to bring them closer together. Ivy wanders its way over the fence. A long hose weaves throughout, a spade leans and a bare tree stands before the rooftops. Some of these are real and some of them serve to represent both artist and subject.

I didn’t want photo-realism in the work. I often use objects that are symbolic and want these to balance out other areas in the painting. The pruned tree that stands behind the fence represents the work he does, taking care of other peoples’ property, ie as a director of a gallery, he maintains the work or growth of others. The hose is in the shape of number 8, which ties in compositionally with the glasses but also symbolises infinity. Art is infinite and continuous-making art doesn’t end. The watering can, spade and rake cast a shadow. The spades handle shadow makes the symbol ‘P’ my initial and for Poland.. In his garden bed he has a range of succulents. He showed me an image of a succulent called the ‘Maltese Cross’ -so I incorporated that as it represents my heritage. The plant he is holding is called “the Dusty Miller”. It has very soft and silvery leaves, rather like Gordon’s beard.

Paul teaches from his studio-check his website or see flyer under “Workshops and classes”in the menu above.