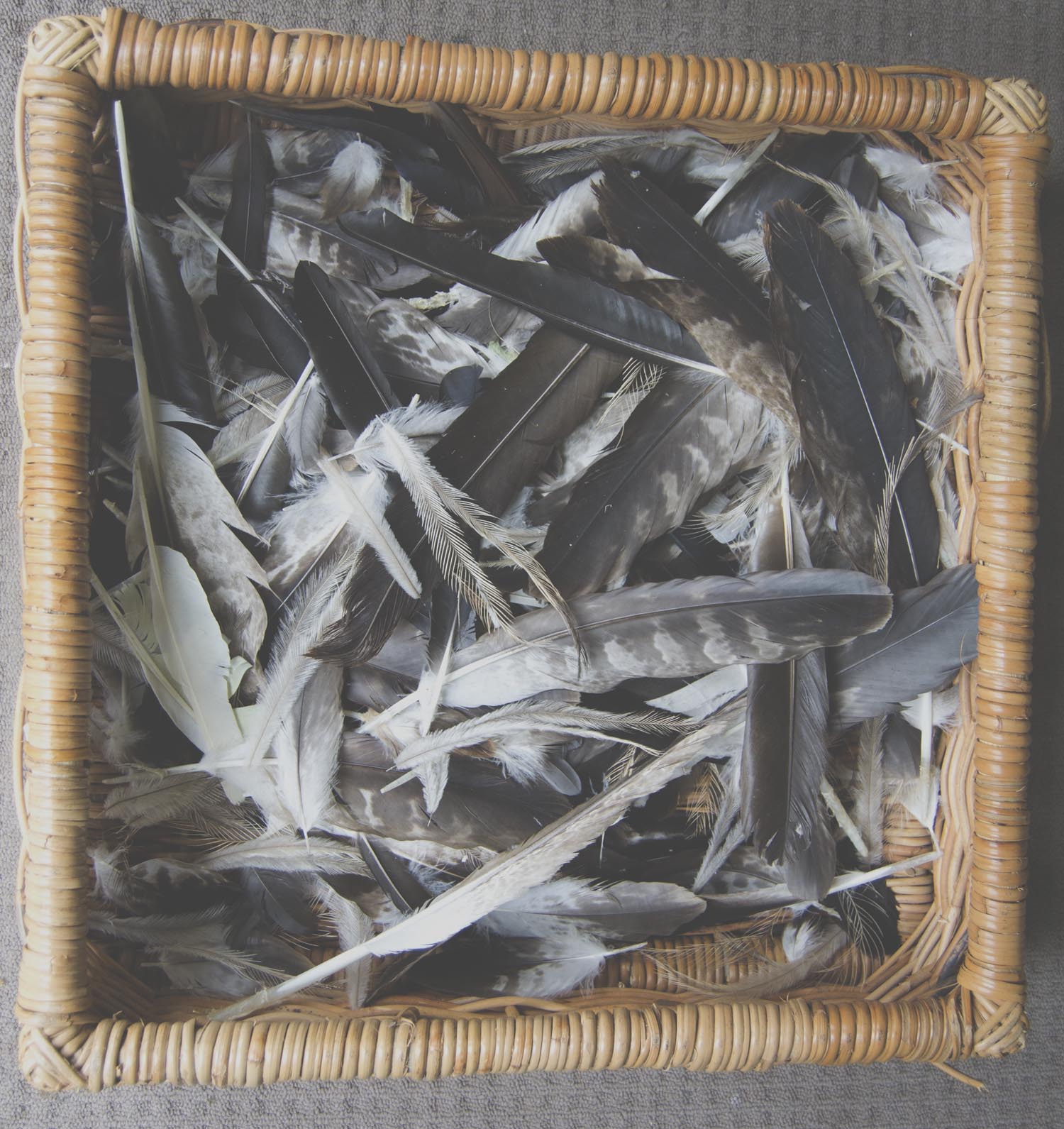 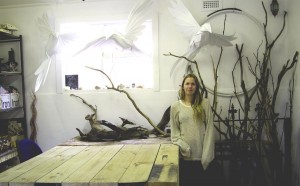 Georgie in her Studio

Recently Georgie and her partner have returned from the far outpost of the Gove Peninsula, in the northeastern corner of Arnhem Land. It’s so remote, you actually need to permission to visit there. She loves road adventures and wanted to learn more about the Aboriginal culture. Georgie explains: 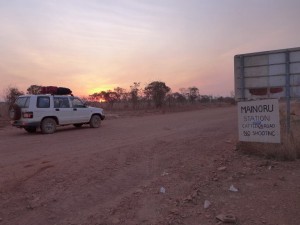 The road into Arnhem Land

“There are a amazing areas throughout Arnhem Land that you’re able to get a permit from the traditional owners to go visit and camp at. These are places that you would never know existed with pristine beaches and waterfalls. There wasn’t a lot of information on the road out there, all we knew was that it was a 2 day drive on an uncharted road and there was only one fuel stop, (which may or may not be open) so we definitely felt like we were heading into the unknown and that was exciting. We had a 4WD, four jerry cans and four river crossings to get the town of Nhulunbuy and there were crocs everywhere.” 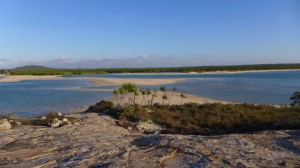 How did this compare to your last trip up North?

“The last time my boyfriend and I went out on a road trip was to Darwin and then across the centre up to The Daintree – but that was just an introduction. This time we were able to gain such a better understanding of the aboriginal culture being totally immersed in it. The local Yolngu people are always happy to tell you their story. They have a totally different way of living and relationship with the land. There’s a lot we could learn from them. “ 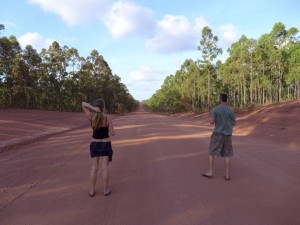 What are some notable differences about the way they care for the land?

“They live by the law of the land, they have a great understanding and respect for it – when they take something from the land, they always give something back which is very special. The land also holds all the stories of their Dreamtime in it and their dreaming is there way of life, so the land is very sacred to them. For a lot of people in the area the saltwater crocodile is their totem animal-it was incredible to see how respected and loved the crocodile is out there.” 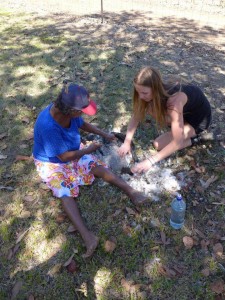 Was it a shock at all to see that contrast?

“Their connection to the land, the animals and their family is confronting when you look at it in contrast to the way we in modern society live. Even in places like Tennant Creek and Katherine where there are alcohol problems, you can sit with any of the locals and learn from them. They are all so willing to share with you their stories, all you have to do is ask.”

Having spent six weeks in Arnhem Land, four weeks in Kakadu and then back to the centre of Australia, Georgie was awestruck by the amount of road kill and rawness of what the land could provide. An avid collector of all found objects both natural and man-made, it proved to be a collectors dream. 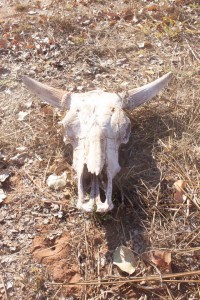 One of Georgie’s found skulls’

“You can find all kinds of incredible things on the road. I collected trees branches, driftwood, emu and wedge tail eagle feathers and bones. I’m now learning how to preserve and clean the bones through maceration and burial so I’ll be able to incorporate them into my sculptures. We also found crystals, which I would like to incorporate more into my work.” 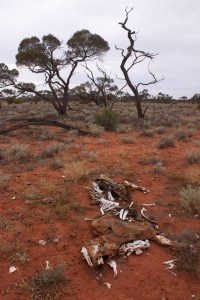 One of the many carcases 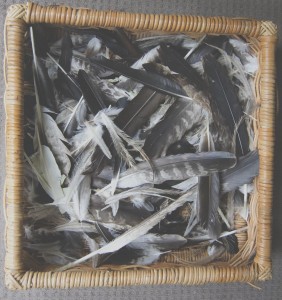 Georgie is a former copywriter and freelances when she needs to make some extra income.

How did you branch out of copywriting into the area of installation art?

“My background is copywriting for advertising. Since I’ve always liked making things out of things, I went around shops asking if I could create something for their window display. I started making art as a way to sell products by putting together installations for bookstores and gallery exhibitions. I then got an opportunity to create an installation for Penthouse Mouse where I was able to build a huge mechanical girl and that started the ball rolling for paid jobs.” 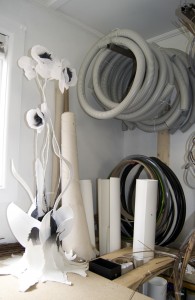 So you’re mostly self-taught, has that been challenging?

“Learning by doing can sometimes be painful. For example, with mechanical girl-when it came time to bolt it to the wall I realised that I should have taken the insides of all the parts out as it ended up weighing about 200kgs! It’s also really fun though, I play around with many different materials and it’s through this process that I discovered corflute (plastic cardboard) to be the most malleable and I liked that idea that all the offcuts get melted down and made into new sheets. The way I work with it has developed from project to project, I’ve found ways to thread, wire and band it together-I’ve learnt new things along the way. One of my favourite things to do is buy a new tool and figure out how to use it.” 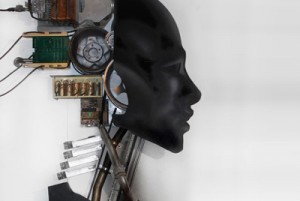 When it comes to setting up her large-scale grandiose installations-it becomes a family affair with her mum and brother and boyfriend all chipping in to help.

“For the Collingwood football club installation, my brother helped me work out all the Maths for the paper pyramids . As for the crystal palace installation-I didn’t have a studio back then so I was making the entire thing in my mums lounge room. It was 26 metres of fabric, paper and foamcore and I had no idea how it was going to look until my boyfriend and I installed it. I tend to work these things out as I go!” 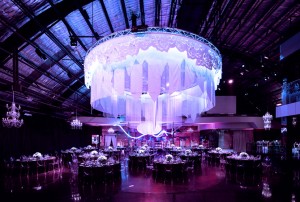 Georgie definitely has a keen visual eye, as her studio seems as if it’s an installation in itself. Apart from the many bones, shapely tree branches and feathers there are all sorts of consumer recyclables such as tubes and computer parts neatly categorized and organized in her studio. 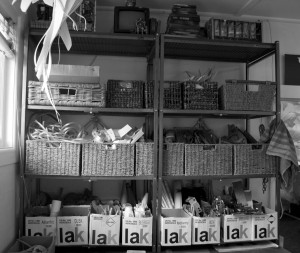 Why the fascination with collecting reusing and up cycling materials? Is this something you have done since a child?

“I’ve always collected and made stuff. Every weekend as a child I would stay on Grandmas Farm in Ceres just out of Geelong. We were always going on adventures finding snakes and collecting twigs and other bits along the way. There were always Mountains to climb, especially in the You Yangs and my grandma was very conscious of caring for the land. She convinced us that picking up rubbish was an adventure-it was so exciting we would beg her to take us out on the road with garbage bags!” 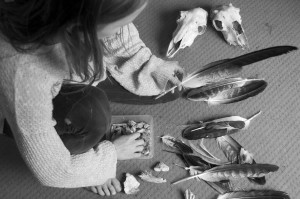 Some of Georgie’s collection

Georgie explains that she loves pulling things apart and putting them back together to see how they work. She also points out that she made her own work bench in the studio and loves the idea of challenging herself to create more complex pieces.

What’s coming up for you in the future?

“The installation I’m working on at the moment for Rainbow Serpent Festival is really exciting for me because it’s the first time I’ll be working on a project with a great group of friends. I have a few other things I’m working on concepts for which will be utilizing more natural materials and recycled found objects and I want to learn how to weld too. I’d like to one day have an exhibition and create a series of sculptural works out of discarded wood, bones and mechanical parts.” 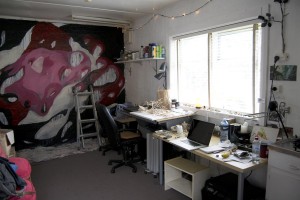 A sample from Andrew Bourke’s journal about his mural painting experience in Nhulunbuy: 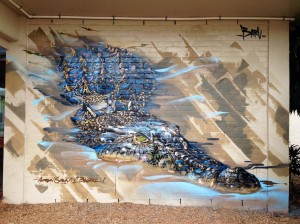 Having spent the last two months travelling via 4×4 with my partner Georgie Seccull and great friend Charlotte through Australia’s Top End, we found ourselves taking a leap of faith and trekking deep into one of the worlds most remote patches of wilderness. After 3 days travel along the Arnhem Hwy we finally arrived in Nhulunbuy. Originally set up as a mining town, this place is now the central hub for supplies, medical and practical needs that filter out to all the surrounding homelands of the Yolngu people. Here we set up and organised our general permits that would allow us to go bush and discover some of the most amazing and relatively untouched places we have ever experienced. Beaches that would pan out into the distance with crystal clear waters as far as your eyes could see (that you can’t swim in – they’re full of crocodiles) and the 3 of us being the only people around for days on end..

I decided to bring my paints with me and see if I could find a space to produce another mural and given my chosen subject matter, an opportunity came about soon after.

The main hotel / restaurant – bar in town named the Walkabout commissioned me to produce my painting across the front entrance wall of the building. Very quickly the word spread that a large saltwater croc was being painted in town and every morning I painted I had a number of spectators dropping past to keep an eye on the progress and I guess to make sure I was doing the image justice (no pressure). You see the saltwater crocodile, particularly to the major clans of that part of NE Arnhem Land to them, is their absolute world. Being one of their major totems of the surrounding clans BARU is their Mother dreaming.

As the Yolngu people “come from the Earth” they identify themselves being one with their surroundings and so to these amazing people the saltwater crocodile is respected and loved equally to that of anyone from family circles. The Yolngu people’s connectivity to nature is something that we in modern society have lacked for far to long now leading us to constantly be fixated on the future instead of living for the now. In short, I felt the importance of producing a great piece for these people as I quickly realised how much bigger this painting was then just me tackling another crazy art project!

The Yolngu people still to this day live their traditional ways, continuing their dreaming through song lines via ceremonies and living off the land. Their culture is still as strong as it ever was way, way back then. The oldest civilization on Earth to us that’s some 40 – 60,000 years old, and these amazing people were more then happy to share their stories and culture with us for the 35 days we lived in their country and on their land.