When I first met Mark Ewenson, he had given me a postcard depicting some of his works at an exhibition in Fitzroy Gallery. I was immediately intrigued with the subject matter; flowers, landscapes; the female figure; subject matter that has always interested me. Another thing that grabbed me was his style. His female figures are very voluptuous and shapely- I immediately thought of Whitely and Matisse. Sure enough, after a flick through his website, I was correct. Another thing I was about to discover was Marks love of using Fabrics in his work. We are not just talking collage here- we are talking ‘Fabric Layerism’ a term that has basically been conceptualised by Mark. And I do believe that Mark has been doing this style for about 15 years and possibly the only person around the globe that is actually doing it consistently in this way. As Mark explains:

“I realised that I have my own language now-as far as my collage making goes. I have gotten to the point where painting is almost completely omitted in some of my works. Matisse regularly did this, he did cut-outs to the whole form of the shapes- he just used paper and not any paints. It becomes like sculpting except its 2 dimensional”. 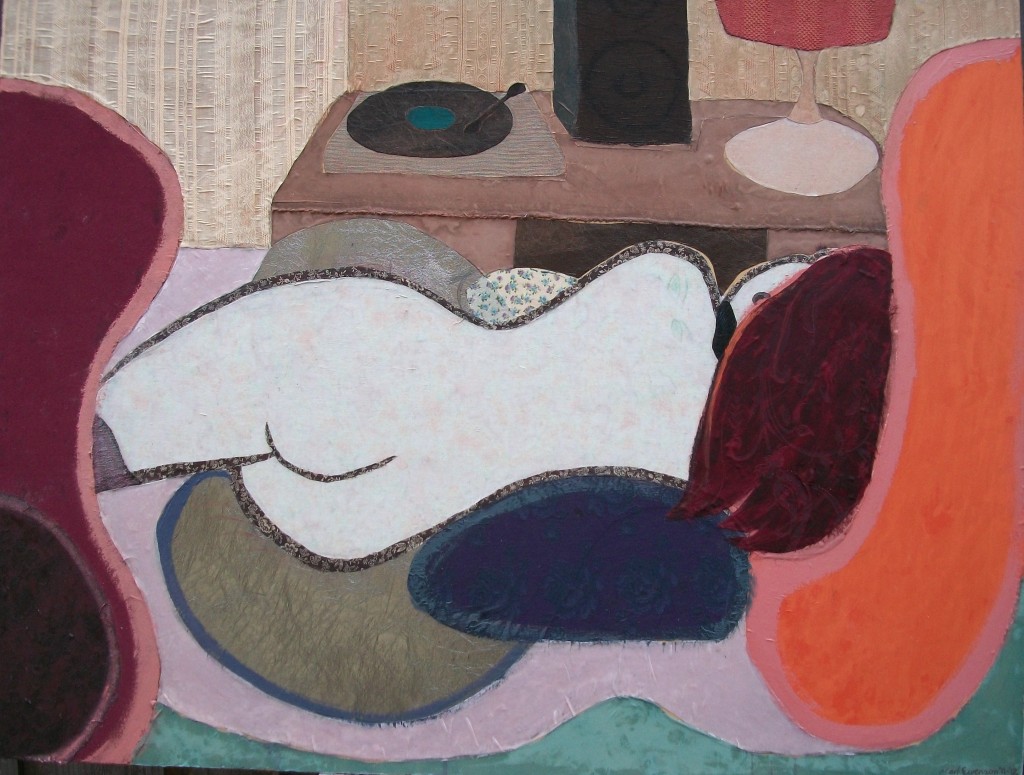 The Pop Art Movement and cubism have also influenced Mark; which is evident in his compositions and shapes of his figures and landscapes. I asked Mark if he had ever considered working in a 3 dimensional way, to bring these forms off the canvas:

“I have never done sculpture. I have been a musician as well though, so that has been another medium. In that way I have been a multi instrumentalist, but the painting has narrowed it down, but with the fabric layerism, I feel as if I am almost sculpting in a way”.

One can be easily convinced that this is a type of sculptural form. Many layers are added over time to give a feeling of texture and depth to the works.

“I keep adding to them (the layers)-over time. Some areas have seven or eight layers and I add paint in sections to make it more graphic and give it more an edge.”

Mark uses acrylic paint a lot these days to accompany his fabrics as the acrylic is more compatible with the PVA.

“I used to use oils, but fabrics sometimes didn’t stick properly, it was a bit touch and go. Now I can layer up fabric and the drying time is fast.”

Mark shows me one of his works that has four different layers. Then comes an application of paint, then more fabric over the top. Another area has a transparent piece with a pink piece of fabric coming through. Sometimes fabric is patterned, or glistens and reflects.

“I love fabrics. I used to go and buy pieces from opp shops back in the 90’s, now I just buy reams of the stuff.”

I ask Mark if he uses any other mediums with his fabrics and paint:

“I use a spray of varnish to protect the work. I ‘m experimenting to see what effect that will have on the work. It’s a bit of a trialling process to see what chemicals are going to mix with the fabrics and things. It’s all a bit haphazard-no idea how archival it’s going to be, but I know the glue is good quality.” 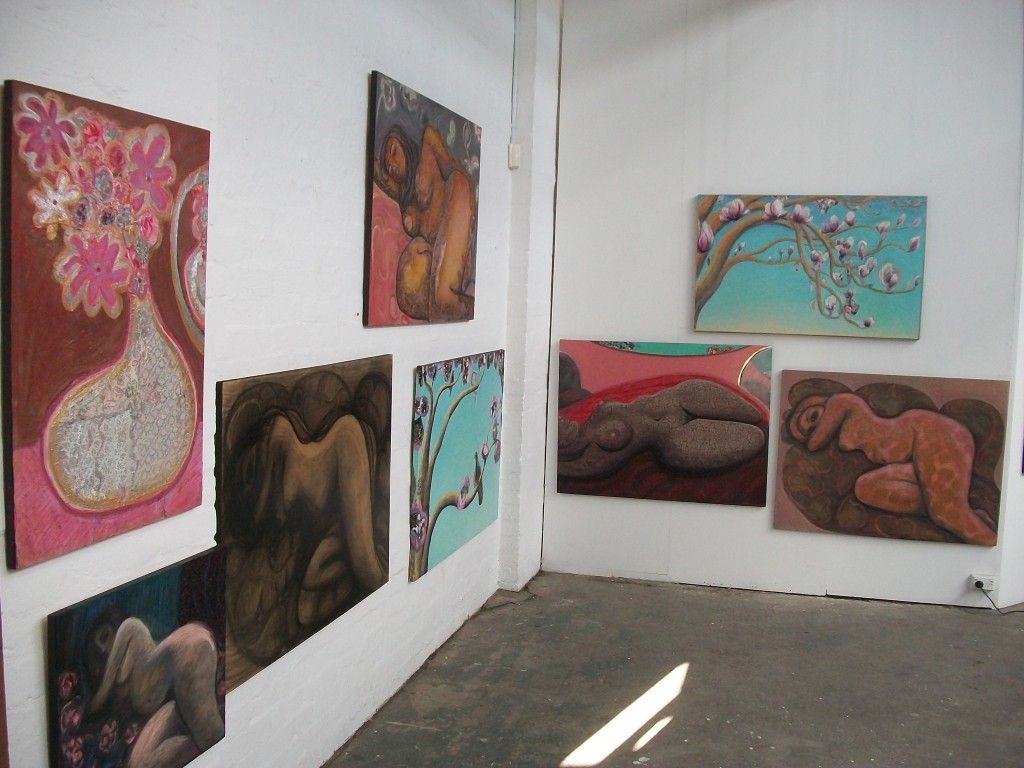 So as far as the Gallery circuit goes, what has been Mark’s experience working with Galleries?

“I’ve been with a few galleries but I have found the Internet has been better for me as far as getting my work out there. I go at a slower place, as I have to also work during the day. One Gallery loved my work, but I couldn’t work at the pace that they wanted me too. I decided that I would work more monumentally on a smaller amount of work.”

And on that note, I asked Mark whether he would stray from his subject matter and get into something new:

“It’s been mainly female figures in interiors for a long time. I’m planning to incorporate some more with nature soon. There is so much to do conceptually and there has been progress.”

What I noticed about Marks work is that because of his unique qualities, it is hard to categorise. I wondered how challenging this was for art critics and galleries:

“Galleries aren’t quiet sure. Some of them find my work a bit edgy and some aren’t sure what it is- even when I tell them people like it and buy it, they find it can’t fit into a commercial box or anything. Thinking in terms of what the public will like, they seem to want work that is very polished and trendy—it can be representational or abstract but has to be polished. Its not that way out (my work)- it is quite different to what else is there. I think galleries have gone a bit conservative the last 10 years because of getting to a kind of saturation level with the market. That’s what happened a few decades back with music, so then there was a developing independent music scene. So it’s logical that visual art is starting to take that course too, and it seems that many people are wanting to access artist’s and their work more directly via their studios and the Internet”.

Mark is definitely like many artists past, staying on task and digging deeper into his subject, mediums and methodology, despite what the rest of the art world is doing.

“I have been reading about the cubists… and some of the artists used to shock each other-they didn’t like what each other were doing. If some one did something new they would be critical of it.”

On Mark’s website, he has blurb on why he thinks painting is not dead. We chatted on this further.

“Many of the lecturers’ and teachers in the 80’s were abstract biased, they were established in their own way. There was this sentiment with some of them that everything had been done. And it’s the same with collage, with some people saying, ‘that’s been done’. It’s like saying, at the end of Beethoven, that’s the end of classical, how can you possibly top that! But there is so much more to explore.”

I asked Mark, finally, where he saw himself in the next 10 years:

“An aim for the next 10 years is to establish this style more and travel and promote and sell my work. And to go to places like America and Europe and exhibit with others who are into the concept. I want to combine the traditional themes of the figure with interior and in the landscape and continue with fabric layerism. There doesn’t seem to be anyone else using that term. I even played around with the terms, and noticed someone had come up with the term ‘layerist’. If I key into the search bar ‘fabric layerism’, there is a lot of crafty stuff, but not as a concept in the way that I do it”. 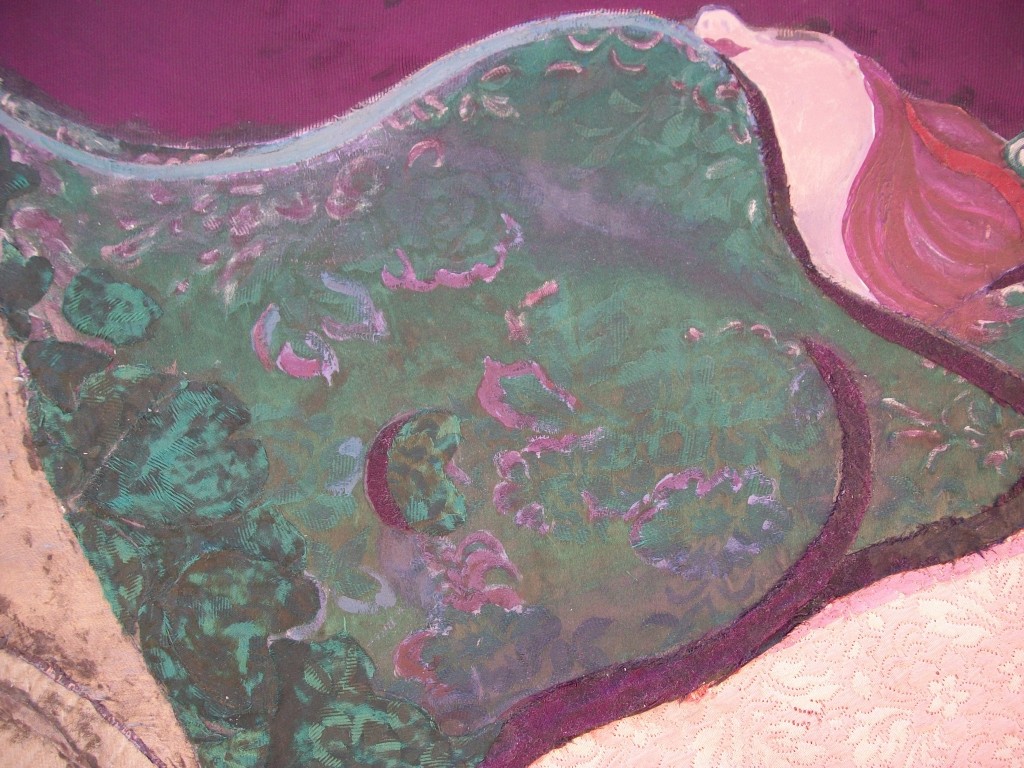 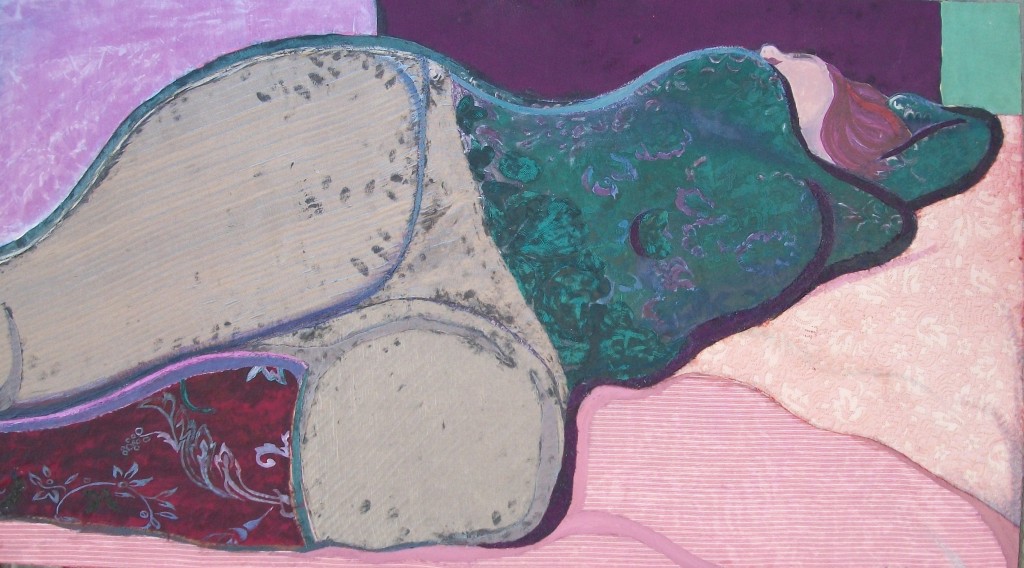 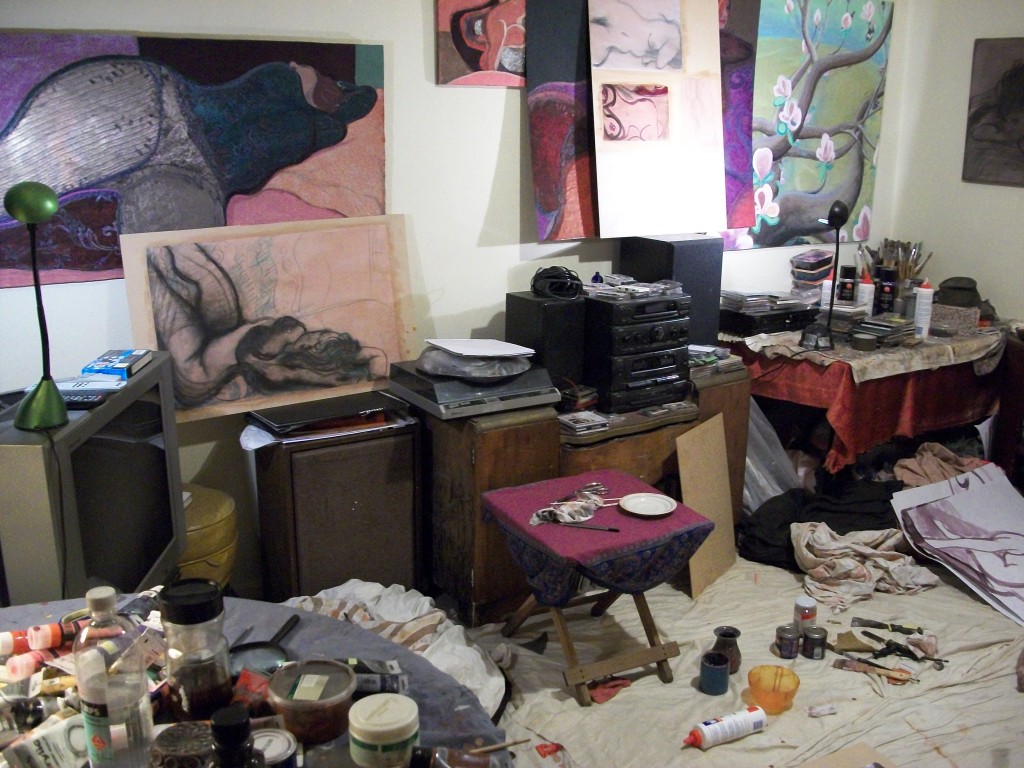