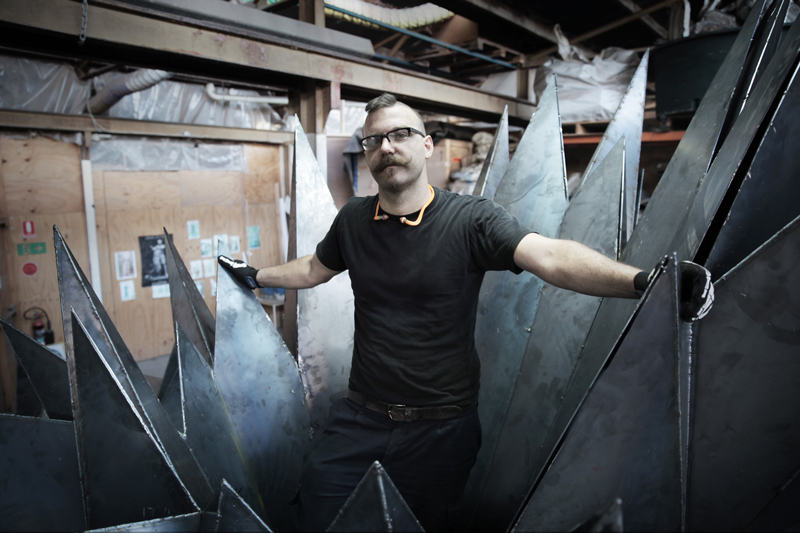 Damian Vick is a self-taught sculptor with an eye for detail and an affinity for the patterns of life.  In his studio space in Footscray- frames for a balustrade are laid out on the table. Intricate branches are marked and individually coded so that other branches can be perfectly slotted into place. With a Graphic design background and a short course in welding, he is now at the skill level where his dream of living off his passion is a reality.

Fundere studios-about a decade old now, is home to some 11 artisans, mostly sculptors. Some of the work made here are large bronze statues of sporting or military figures. Damian has been at Fundere studio for about 2 years, working intently on his latest sculpture “Moment”-that has been installedin the Southbank arts precinct-on the exterior the Guild apartment building. The piece measures 7 metres in diameter and 2.4 metres deep.

“I’ve always been of the opinion that if you can imagine it you can find a way to make it somehow.” 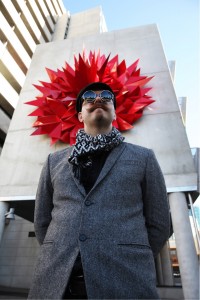 Is this where you started sculpting?

“I’ve always enjoyed the process of creation; from the spark of conception, through a process of refinement, and the time spent engaging with the materials.

I began to pursue this more vigorously around 7 or eight years ago when I completed NEIS (New enterprise incentive scheme) and I set up a warehouse space with other creative friends in Northcote, where we lived and worked for 4 and a half years. I was of the mind that if you have space, you have opportunity, a place to pursue your ideas in a productive environment with other like-minded people. It was a great place to live and allowed me the opportunity to begin my practice and develop skills without the financial burden of paying for a studio in addition to somewhere to live.”

“Unfortunately the local council became aware of our existence and eventually sought to evict us. A familiar story I’m afraid.

This being said, I was fortunate enough to discover Fundere studios and I’ve been extremely happy working here ever since.” 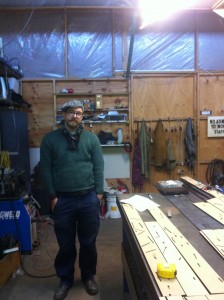 What got you here?

“I became disillusioned with the limitations of working as a graphic designer and was keen to pursue a more physical medium. While I identified that I wanted to create sculpture, I was hungry to develop the skills required to manipulate the materials that resonated with me (primarily steel and timber), rather than re-enter further education. Initially I was happy seeking projects that granted me the ability to develop my skills and these often contained a functional aspect, such as lighting, privacy screens and furniture. However my passion for sculpture has always been the driving force behind these endeavours and now that I have a handle on the techniques, possibilities and procedures involved in using the materials that lie at the core of my practice, I am engaging more with the conceptual side of the art form.”

How did you come to create the sculpture on Sturt Street?

“One of the partners of PGA had seen a large privacy screen-that I had created in 2009 and contacted me regarding a small residential project. Years later they contacted me again and informed me that they required an artistic façade on a new development they were building in Sturt Street and asked if I’d be interested in putting in a proposal. I immediately recognized the rare and outstanding opportunity this was. While I have always dreamed of developing large-scale sculpture in public settings, this project was set to challenge me in every way.” 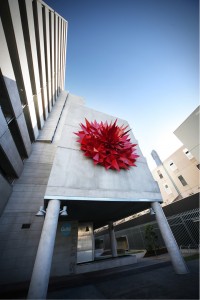 Tell me about your process for making the sculpture

“There were so many factors and unknown elements to this project that it was simply impossible to proceed in a linear fashion.

I set about defining the core characteristics the work needed to have and identified three key requirements;

1.   It had to be relevant to the local environment in terms of culture, concept and aesthetic.

2.   Considering the significance of the opportunity it presented for me personally, and that it would be my first work to be permanently installed in a public setting, it had to express a concept that I felt would embody an inherent truth, something that resonates deeply on an emotional and intellectual level.

3.   I had to be able to find a way to actually build and install it.

With this in mind I created a vast array of ideas and began spiraling inwards, refining and refining to ensure that all these parameters were met equally but without compromise.”

How is it put together?

“It was constructed in around 50 different sections (9 pieces of frame and 40 modules that attach to it). It was designed in a way that each piece had to be installed in a particular order such that it can be bolted to the frame and the neighbouring modules. ”

Did you make a small-scale model first?

“Actually, no, not a physical one. I taught myself how to use a simple 3D modeling program, ‘Sketch up’ (a free Google program). I created literally hundreds of models and variations as I searched for the shape that finally described the idea I set out to explore. This was the first step. I then set about deconstructing the model into modules that could be actually be handled during installation. I also developed a coding system that would describe how each individual triangle of steel would be aligned inside each module, before dismantling them piece by piece, and laying them out for cutting.

When it came to construction I essentially repeated the process in reverse.”

“It was. I am drawn to creating forms that are rich in detail yet are integrated into simple and elegant underlying structure. Much like the physical universe, I attempt to create works that reflect the intersection of elegant and predicable precision, with fluctuating quantum chaos.” 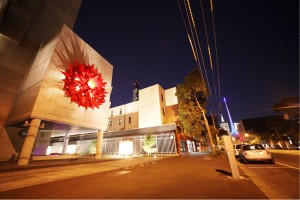 Is that how you started from the beginning-with complex ideas?

“I don’t know whether the ideas are incredibly complex but I knew the form itself it would end up with a significant amount of detail. This being said, the underlying structural shapes involved in this work are fundamentally simple; a circle and a series of fibonacci spirals. This arrangement just provides a base from me to work from, and I proceed to introduce complexity and randomness until the work has the aspects I like.”

How long did it take in total?

“I was sketching in June 2012, built the actual sculpture from December until the end of March and installed it in late April. In terms of hours, I couldn’t tell you. I would have worked an average of 12-14 hours a day, 6 or 7 days a week during most of that period. I felt so deeply fortunate to have this opportunity that I threw myself into it with complete abandon. It would not have been possible had I not had such an understanding fiancé, as well as family and friends that helped and supported me through 10 months of relentless devotion. ”

Future plans for your work?

“ I have always had dreams, but dreams don’t go far without plans, so I am really entering a new stage of planning now. I want what I think most artists want, to be in a position where I can pursue any ideas that I feel warrant creation. Ultimately, I would like to work myself into a position where I have the opportunity to create large-scale public sculpture. I feel that the creation of my recent sculpture, Moment, to be only the first step in this direction, and I plan to do all that is necessary to cultivate more opportunities like that.”

Where do your ideas derive from?

“I think they come from a variety of sources but are really just the consequence of thought and experience. I’m of the opinion that patterns are the manifestation of underlying truth and this is the reason I’m very interested in science and particularly physics. When I read or reflect upon the behavior of matter, space, time and life, I look for patterns; a shape or a behavior that repeats over time or on different scales. I feel that these patterns allow us to a glimpse at the underlying framework of our universe, and ultimately ourselves. I find that I naturally visualize these concepts, and the visualisions become the starting point for a form that I develop into a sculpture.”

Why did you gravitate to the 3D form?

“I found the 2D print medium unsatisfying and knew that I needed an additional spatial dimension to explore my ideas. In addition to this I simply love the physical processes involved in the mediums I work with. I find that I enter an extremely enriching and meditative state of mind when I become absorbed in the process of creation. The mind goes quiet and the line between myself and my work begins to blur. It creates a state where I feel in touch with something larger and deeper than I am able to feel otherwise. Essentially, it just feels natural and the depth of joy that it brings me enriches all other elements of my life.” 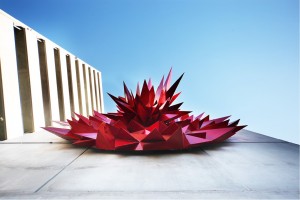 Do you connect with many other sculptors or artists?

“Honestly, not as much as I would like to. I now identify with the fact that it is time to begin interacting with the artistic world more actively. For the last five years I have poured myself into developing my own voice and creating a well of inspiration that I can draw upon. I have sought to develop an understanding of the materials I am drawn to and the skills, techniques and process involved in shaping them. Now that I feel comfortable with this base of knowledge I am looking to become more involved in the artistic community, to absorb new ideas, be inspired by other creatives, and to gain a richer insight into the stream of artistic endeavour. I seek a greater understanding of where I belong and where I can find the opportunities to evolve.”